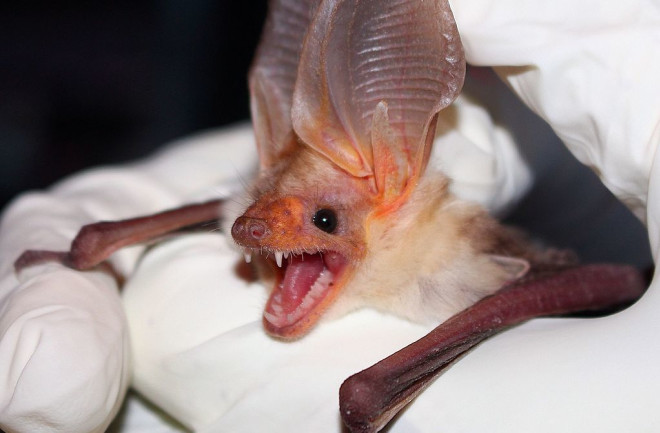 These tough bats can tussle with the deadliest scorpions in North America and win. Photo by Connor Long Pallid bats (Antrozous pallidus) are quirky little creatures, the sole species in their genus. Their long ears, which can equal half their body length, make them look quintessentially batty, but unlike most of their night hunting relatives, they prefer to tackle ground-dwelling dinners—a strategy called "gleaning." Pallid bats glean as much as half their body weight in prey every night, and their diet includes a wide range of crunchy little critters, including crickets, praying mantis, and beetles. It is their taste for scorpions, though, that is particularly intriguing, and piqued the curiosity of scientists. It was unknown whether the bats have a trick for catching scorpions that keeps them from being stung, or whether they are resistant to the animals' agonizing toxins. In a new PlosONE paper, researchers show it's the latter: the bats' laissez-faire attitude towards venom stems from an invulnerability to scorpion neurotoxins due to alterations in the voltage-gated sodium channels that the toxins target. Being armed with venom tends to make a species somewhat unpalatable, as the risk of being stung or bitten isn't worth the tasty reward of a successful hunt to most predators. But there are some species, like the notorious honey badger, that don't seem to care. Studying these exceptional hunters provides key insights into how toxins work at the molecular level, which can help determine effective treatments or even elucidate useful pharmaceuticals in addition to revealing how venom resistance evolves. https://youtu.be/VTFMJxgFSj4 For years, there have been anectdotal reports that pallid bats attack scorpions with reckless abandon, including Arizona bark scorpions (Centruroides sculpturatus). These large arachnids are considered North America’s most dangerous scorpions, armed with potent stingers that induce extreme pain and have even caused human deaths. So how is it that these little bats can survive such dangerous meals? Researchers at the University of California, Riverside were eager to answer that question. Their first step was to confirm that the bats are truly resistant to the scorpion's venom. In high-speed videos of hunts, they witnessed Arizona bark scorpions stinging bats that went on to successfully consume the scorpions, seemingly unaffected by the venom. They then injected doses of venom ranging from 1 to 10 milligrams per kilogram of body weight into bats and mice (as a control). Again, resistance was confirmed in the bats—while the mice convulsed with pain or died, the bats didn't seem to mind for the most part. Even at the highest dose, 3 of the 4 bats injected were unfazed, while the one bat that did react was back to normal in less than ten minutes.

All force, no finesse—bats get stung plenty when feeding on scorpions. Video S1 from Hopp et al. 2017 (high quality video) Confident the animals were indeed shrugging off the venom, the scientists sought out the mechanism for their resistance. They created libraries of the proteins expressed in neurons known to be affected by the scorpion toxins in other species, and looked for changes to voltage gated sodium channels that the neurotoxins target. What they found were several mutations not seen in any other species that is resistant to scorpion venom. "These mutations are novel in the pallid bat, suggesting an unknown mechanism of pain modulation in the pallid bat that involves altered ion channel function," said Bradley H. Hopp, first author of the research paper, in a press release. "Our work sets the stage to not only identify potentially novel mechanisms of pain modulation with application to human pain management but also increase our understanding of adaptive modifications of ion channel function that modulate the excitability of neurons." Exactly how these mutations work is unclear, so the researchers have planned follow up studies to determine how the changes function. They also want to find out if other species of gleaning bats are resistant to venoms, and if so, whether resistance is conferred the same way. Such information could lead to breakthroughs in pain management in people, the authors suggest. "We know that voltage gated sodium ion channels are important in generating the neural signals that we perceive as pain," said Khaleel A. Razak, senior author on the paper. "We hope to identify the ways that the pallid bat has altered these channels to reduce pain, and to see if that process can be mimicked pharmacologically."