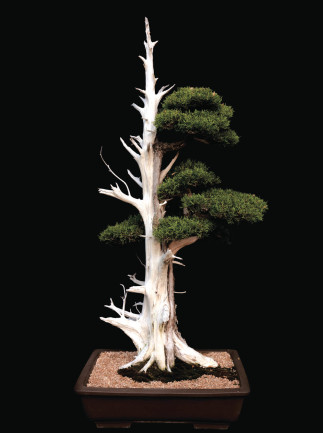 The origin of the art of bonsai and its predecessor penjing is ancient, dating from some 1,200 to 2,000 years ago. One of the early Chinese bonsai origin legends asserts that it was in the Han Dynasty (206 B.C. - 220 A.D.) that an emperor created a miniature replica landscape with hills, valleys, rivers, lakes and trees that represented his entire empire. Thus he was able to gaze upon his empire from his palace window. This landscape-based form of art was his alone--anyone found in possession of a diminutive landscape was seen as a threat to his real empire and put to death.

A new photography book, Fine Bonsai, presents rare specimens as photographed by Jonathan M. Singer: "The beautiful miniature trees and shrubs featured here, many never before photographed, seemed to pose for us, allowing the camera to capture a fragment of time and space wonderfully and effortlessly. Many of these trees are so rare they are almost mythical." The California juniper shown here is estimated to be 250 years old, and has reached a height of around 48 inches. Trained for more than 20 years, this tree was allowed to acclimate and strengthen before it was shaped. The dead wood on one side of the bonsai suggests that harsh desert winds might have killed and polished the wood. Although the exposed surface roots are dead, they still provide a stable base. California juniper is a popular bonsai subject that is found growing in dry or desert locations, usually growing as a shrub but sometimes reaching thirty feet in height. Trees with old dead wood on the trunks and branches are prized as bonsai specimens---dead wood resists rot and can be carved.

Bonsai gardeners use methods including wiring branches, extreme pruning of roots and branches, root binding, grafting, and custom soil and cinder mixtures. But perhaps the most important element of all is patience. Instructions for achieving the "roots over rock" effect give insight to the work of a bonsai artist: trim the roots, place the rock, bind roots, then re-pot and wait two years. Often a bonsai is created by many hands over the years---a highly prized tree is one where the hand and ego of the artist become invisible, as in the zen concept of "artless art." 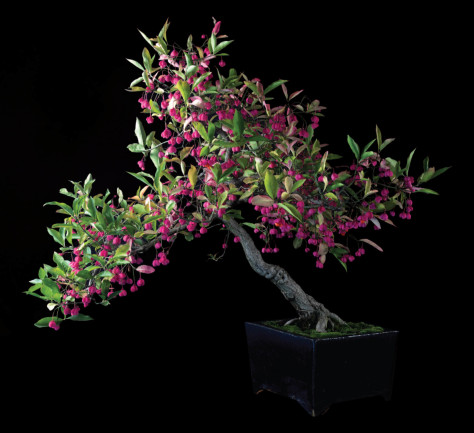 There are well over 100 different species of Euonymus found throughout the world. They vary from ground covers to small trees; some have evergreen foliage, but most species are deciduous shrubs. The Japanese spindle tree is an unusual species because of its large, coral-colored fruit, which begins to form in late summer. In early autumn the fruits become plump and slowly open, revealing a bright orange seed in the center of each. The small, colorful seeds often remain well into winter. This bonsai was started from a small rooted cutting purchased in Seattle, Washington, in 1984 and has been completely container grown and trained. 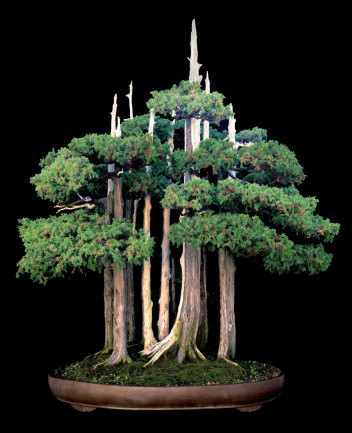 This is probably the most famous bonsai in the United States. In 1953 bonsai artist John Y. Naka, of Los Angeles, California, selected a Foemina juniper for his first demonstration. Soon he added two more Foemina junipers to his collection. Naka remembered a Japanese cryptomeria forest growing near a shrine in Japan and wanted to emulate its majesty in a forest bonsai. He combined the three junipers to make a forest and soon added others to create a seven-tree planting. He chose a poetic name, Goshin, Japanese for “protector of the spirit.” In the initial forest, each of the seven trees represented one of his grandchildren. By 1976 Naka had four additional grandchildren, and Goshin had grown into an eleven-tree bonsai forest. 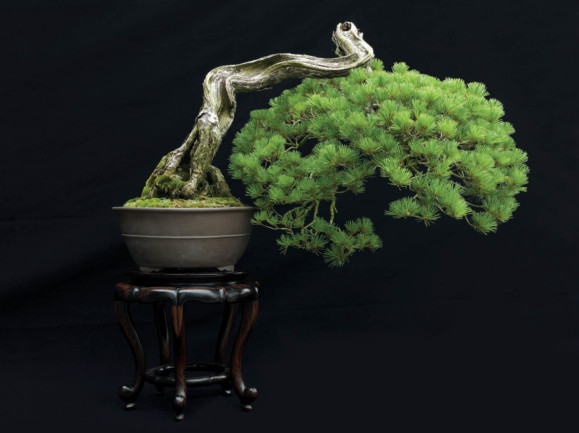 Kamajiro Yamada, the third-generation proprietor of Seiko-en Bonsai Garden in Omiya (a suburb of Tokyo), developed the basic form of this Japanese five-needle pine. He was a talented artist with a great knowledge of literati-style bonsai (with twisting and turning trunks). 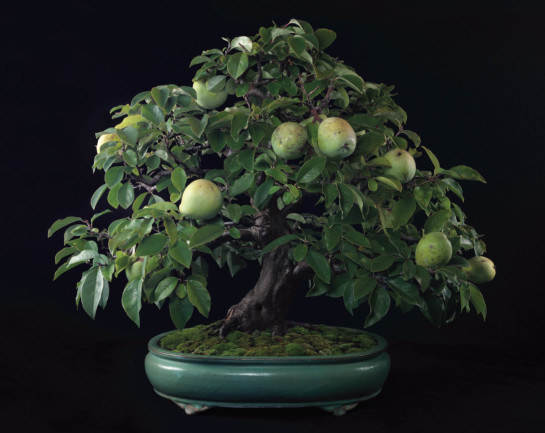 Chinese quince is appreciated for its lovely, dainty pink spring blossoms; large, fragrant yellow fruits in autumn; and distinctive mottled bark during winter dormancy. The fruits on this bonsai are nearly ripe and about to develop their golden color and fragrance. The foliage will turn from dark green to bright red and orange, which is an indication the fruit has ripened. This bonsai was originally air layered from a large garden tree approximately 35 years ago. 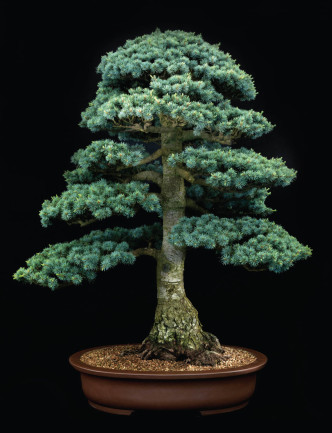 Japanese estimated age: 80 years. Bill Hatashita, of Southern California, began training this bonsai in 1969 from nursery stock or an old landscape tree. It is unusual to see a thick-trunked blue Atlas cedar bonsai. The Atlas cedar is one of only a few true cedar species of the world. It is native to the Atlas Mountains of Morocco and Algeria. This cultivar must be propagated by grafting, and the graft site can often be ugly. The graft union at the base of this bonsai provides a stable-appearing beginning for the tall, straight trunk. The foliage pads are well spaced, and the crown of the bonsai is rounded to present the feeling of an older tree. Continued pinching of the new shoots is necessary to maintain the foliage pads. 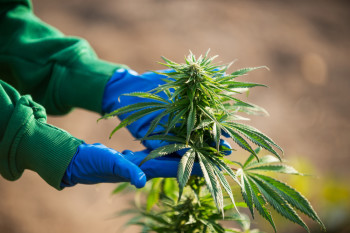