Tigers and Humans Tangle in Sumatra; Both Sides Lose 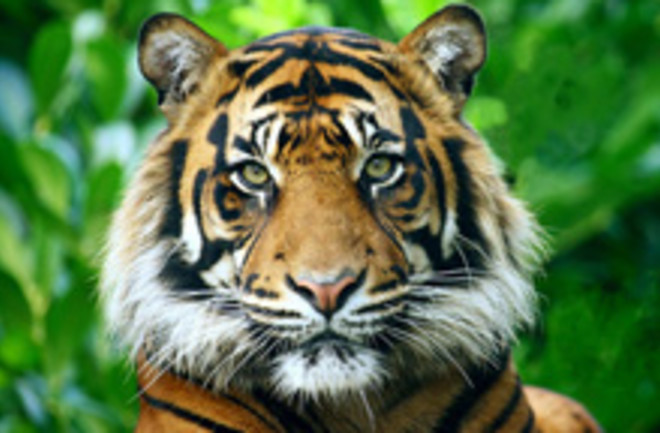 A growing conflict between Indonesian loggers and the critically endangered Sumatran tiger has incurred a death toll on both sides, with little solution in sight. Environmentalists say that Asian Pulp and Paper (APP), one of the largest paper companies in the world, has destroyed much of the island of Sumatra's rainforest. The activists argue that the tigers, whose wild population is thought to hover at around 400 but could be as low as 250, have been left without a natural habitat and have increasingly regarded humans for food. Eyes on the Forest, a coalition of 25 environmental organizations, has released a report to back up the allegation. By overlaying the locations of [human-tiger] conflicts with government maps of pulpwood plantation concessions, Eyes on the Forest found a direct correlation between tiger conflict and the unsustainable forest practices of APP, its holding company Sinar Mas Group, and other associated companies that supply pulpwood to APP's mills [Wildlife Extra], with 60 percent of the total 245 human-tiger encounters having taken place on land associated with those companies. As their forests disappear under loggers' saws or to make way for plantations, Sumatra's endangered tigers are, quite simply, turning to humans for food [BBC]. APP, which has been convicted of illegal logging in Indonesia, China, and Cambodia, and produces 5 million tons of paper and packaging materials every year, is responsible for more natural forest clearance in Sumatra—the only habitat for the Sumatran tiger—than any other company [Wildlife Extra]. Sumatra has lost half of its remaining rainforest since 1985, and environmentalists allege that illegal loggers and farmers are clearing land on the island's national parks. Worsening the situation for tigers is the continual decline of prey for the tigers due to heavy poaching by humans [Mongabay.com]. In Riau Province, Sumatra, 55 people and 15 tigers have lost their lives due to the conflict. An additional 17 tigers have been captured and removed from their habitat [Mongabay.com], and some say that the incidents have become so frequent recently that deadly tiger attacks on humans have reached one per week. Catching the tigers, however, does not solve the problem. People should be safe from the threat of tiger attack, but the endangered species should not be left to go extinct, [Jakarta Post], environmentalists argue. Logging might be illegal, but for the people living here the punishment seems disproportionate.... "We're victims, not thieves. We go to the forest to put food on the table. You can't blame us for this conflict with the tigers" [BBC], said one local man who lost two family members in tiger attacks while cutting down wood nearby. Related Content: 80beats: It’s Hard Out Here for a Tiger, World Bank Says