In the White Sands National Park of New Mexico, there are three species of small lizard that all share white complexions. In the dark soil of the surrounding landscapes, all three lizards wear coloured coats with an array of hues, stripes and spots. Colours would make them stand out like a beacon among the white sands so natural selection has bleached their skins. Within the last few thousand years, the lesser earless lizard, the eastern fence lizard and the little striped whiptail have all evolved white forms that camouflage beautifully among the white dunes.

Erica Bree Rosenblum from the University of Idaho has found that their white coats are the result of changes to the same gene, Mc1r. All of these adaptations arose independently of one another and all of them reduce the amount of the dark pigment, melanin, in the lizards' skin. It's a wonderful example of convergent evolution, where the same environmental demands push different species along the same evolutionary paths. But Rosenblum has also found that there are many ways to break a gene.

Each of the three lizards has a different mutation in their Mc1r gene, that has crippled it in diverse ways. These differences may seem slight, but they affect how dominant and widespread the white varieties are, and how likely they are to branch off into new species of their own. Even when different species converge on the same results - in this case, whitened skin - and even when the same gene is responsible, their evolutionary paths can still be very different.

The Mc1r gene encodes a protein called the melanocortin 1 receptor (MC1R). It's a messenger that sits astride the cell's membrane and transmits messages across it. It triggers a sequence of events that stimulates the production of the dark pigment melanin. In this way, it affects the skin colour of many animals and faulty copies of the gene tend to result in lighter colours. In humans, for example, around 80% of redheads owe their hair colour to common faulty variant of Mc1r. 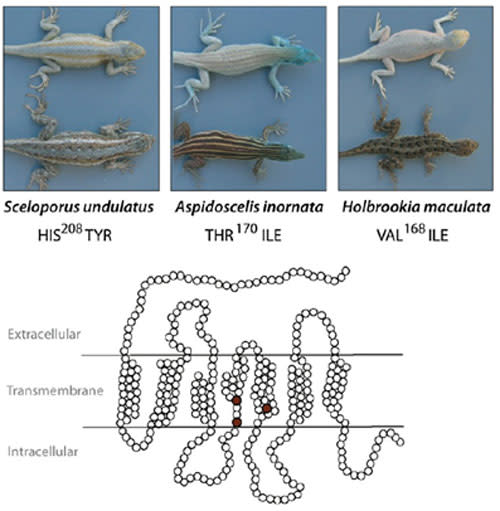 In each of the White Sands lizards, just one of the MC1R protein's many amino acids has been swapped (red circles above), and it's a different one in each species. All three amino acids lie within the part of the protein that straddles the cell membrane. These regions are important for keeping the protein together, and for channelling signals from one side of the membrane to another.

Rosenblum found that white fence lizards and whiptails have MC1R proteins that are severely disabled by their single mutations. Their ability to channel signals across the membrane has been slashed by around two-thirds. In the fence lizard, the protein can't fit properly into the cell's membrane. In the whiptail, the altered protein doesn't interact well with partners that carry on the signals it transmits. Either way, there's a breakdown in communication.

The earless lizard is slightly different. Its MC1R protein worked in the normal way so the link between its replaced amino acid and the white colour isn't straightforward. It could be that a gene sitting very close to Mc1r is actually responsible for the colour change. Alternatively, it's possible that the protein works normally, but is much less stable, or produced at much lower levels. Either way, it's clear that all three lizards have achieved their adaptive camouflage through different means.

These adaptations must have been independent. The fence lizard and the whiptail are the most closely related of the pair, but even their last common ancestor still lived at least 175 million years ago. The White Sands dunes, on the other hand, have only been around for 6,000 years.

You might think that the means are unimportant if the ends are the same. As long as the lizards are white, does it really matter why they are white? Rosenblum certainly thinks so.

For a start, the whitening variants of Mc1r are inherited differently. The fence lizard's one is dominant, so even individuals with one copy have blanched skin. The whiptail's version, on the other hand, is recessive so it takes two to whiten. These different inheritance patterns also affect how widespread the whitening mutations are among the lizard populations. And they could affect the odds that the white versions will eventually branch off into isolated species. After all, these lizards use their colour patches to signal to one another, so whitening up for the sake of camouflage could affect their ability to recognise peers or attract mates.