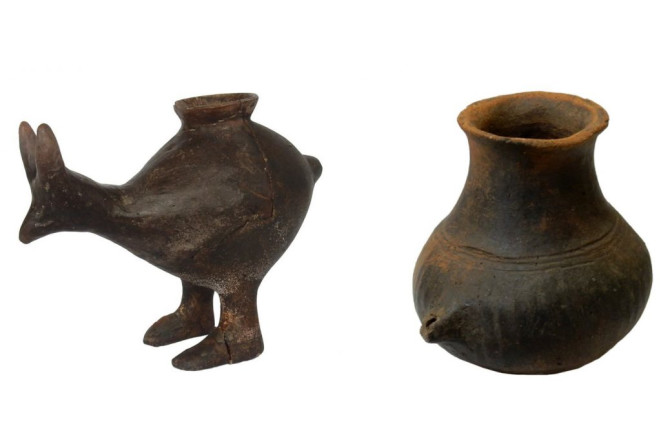 A study of tiny clay pots with small spouts discovered at archaeological digs reveals that the vessels were likely used as milk bottles to feed babies. The specialized pots have long been found at sites around the world, and scientists have speculated that they may have been used to feed children or the sick. By looking at the lingering traces of ancient food inside these clay bottles, scientists have finally unlocked their secrets.

The bottles offer a glimpse into early parenting, says study author Julie Dunne. “I think it’s obvious that they loved their children in the same way that we do today,” says Dunne, a biomolecular archeological scientist at the University of Bristol in the United Kingdom.

Beginning during the Neolithic Period over 6,000 years ago, small teapot-like vessels began appearing in Europe. They came in many sizes, shapes and colors, including some made in the shape of animals. The mysterious vessels became more common in the late Bronze and early Iron Age, Dunne says, and have cropped up at numerous dig sites. By this time, people had left hunting and gathering behind in much of Europe, the Middle East and Asia, and turned to planting grains and domesticating animals. As agriculture expanded and nutrition improved, women started having more children and the human population exploded.

The unique clay bottles have remained something of a mystery for so long because they have such a narrow opening at the top, making it near impossible to take a sample from inside without damaging the artifact. To solve the problem, Dunne’s colleague, Katharina Rebay-Salisbury from the Austrian Academy of Sciences, tracked down two spouted vessels that had large open tops and one that was broken, making it possible for Dunne to sample inside with a small modeling drill.

All the vessels came from the graves of children in what is now Germany, two dating from around 800 to 450 BC and one between 1200 and 800 BC. In archeology, context is everything, Dunne says. Finding the vessels in children’s graves was a strong indicator that the objects were used for or by the children in some way.

Their research appears in a study published today in the journal Nature.

In the samples from each pot, Dunne was on the hunt for the remnants of ancient meals. Fats and oils from food leach into the sides of an unglazed ceramic pot and the traces remain locked in the clay long after the meal and the people who ate it have been forgotten. Dunne ran the samples from each pot through a series of chemical analyses to isolate the stable isotopes of the old, lingering fats. These isotopes act as a molecular signature, and by comparing them with isotopes found in the fats of modern day animals and plants, Dunne could determine what kind of food the vessels once held.

The molecular signatures revealed two of the vessels held ruminant animal milk — the milk of cows, sheep or goats. The technique is not able to distinguish between these types of milk, although Dunne notes cows were particularly important to European agriculture around this time. The third vessel likely held a mixture of both ruminant and pig or human milk.

These vessels provide us with some of the first evidence of what babies were actually fed in prehistory, Dunne says. In particular, finding animal milk inside hints that Neolithic mothers were beginning to wean their infants, perhaps so they could have more children.

And while the clay bottles in this analysis were quite simple, more elaborate examples have been found around the world, Dunne says, including bottles painted bright colors or shaped to look like animals. Perhaps parents shaped them like this to make their baby laugh, she says.

It’s amazing to get a glimpse of “how much these prehistoric parents loved and cared for their children,” she says.