Those Crickets In Your Basement? They Probably Came From Asia 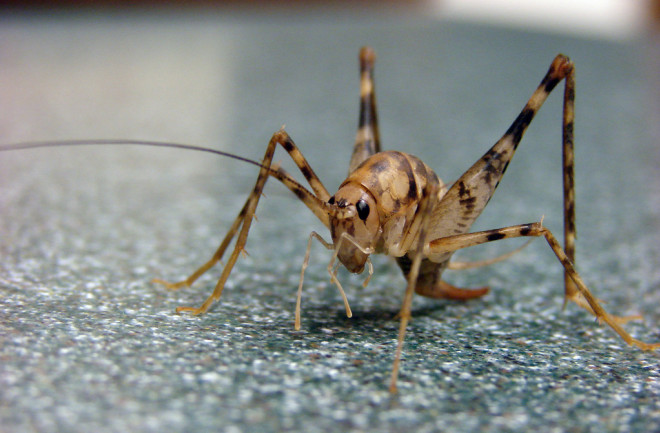 The banded legs and thin body indicate that this is Diestrammena asynamora, a non-native cricket from Asia. Image by Steve Fernie via Flickr. <a href='https:

If you have them in your basement, you know it – these large, seemingly spider-cricket hybrids that multiply like mad and have a freaky habit of jumping right at you when you approach. But it took some brave citizen scientists to reveal something new about so-called camel crickets: The variety that lives in our basements is overwhelmingly made up of non-native species.

If these invaders are shown to have elbowed out native crickets, they would be branded full-fledged invasive species – but more research will be needed to figure that out.

Citizen scientists from 23 states, the District of Columbia and one Canadian province answered the call from researchers at North Carolina State University for photographs of basement camel crickets, also known as cave crickets, spider crickets or sprickets.

In nature, these camel-colored crickets live under rocks and logs, but as a houseguest they’re commonly found in damp basements and garages, eating dead bugs and leaves. The pinky-sized camel cricket dwarfs the common house cricket, which is noisy and black. Camel crickets do not make a sound. Their long legs and prominent antenna mean that some people mistake camel crickets for huge spiders. They are completely harmless to humans.

“The only thing about them that is particularly frightening,” says Mary Jane Epps, the post-doctoral researcher who oversaw the study, “is they fling themselves aimlessly in the air when they are surprised, presumably as some kind of anti-predator defense.”

It’s a tactic that has proven effective at scaring the sprickets out of people who are just in the basement trying to get their laundry done.

There are 150 species of camel crickets native to North America. Thirty years ago the scientific literature described several of those as common in the basements of people’s homes. In addition, one non-native species originally from Asia, Diestrammena asynamora, was found in commercial greenhouses, but not in homes.

But Epps found a radically different basement landscape in the 163 useable photos or specimens she received. (Yes, some people mailed crickets to the study. Epps says that dead camel crickets smell “so bad.”) Most of the samples came from the eastern United States. And nearly all of the crickets Epps received – 88 percent – were non-native species. That was a surprise.

Some of these foreigners were Diestrammena asynamora – but, adding to surprise, others appeared to be a species never before confirmed in the U.S.: Diestrammena japanica, also originally from Asia. The authors reported their findings this month in PeerJ.

'The thicker body and spiny legs indicates that this is a member of the Ceuthophilus genus, a native cricket. <a href='https:

Aliens in the Basement

Epps says the next step is to get scientific confirmation of the mystery crickets’ species, which would require catching some and having an expert take a careful look at their private parts, since for many insects, that is where the most important distinguishing features are. She hopes to embark on that task soon.

The finding suggests that if you have camel crickets in your basement, chances are, especially if you live in an urban or suburban area in the East, that you are harboring at least one alien species.

There are other scientific questions that remain. Are the non-native crickets having an ecological impact? Have they displaced native camel cricket species? Researchers hope to tackle these in the future. But whatever the answers – and to the dismay of laundry-doers everywhere – it looks like this is one alien species with a solid foothold in our human environment.

Perhaps we’re lucky that they’re willing to bunk in the basement.