This Juvenile Dinosaur Got Eaten, Bite Marks on Bones Reveal 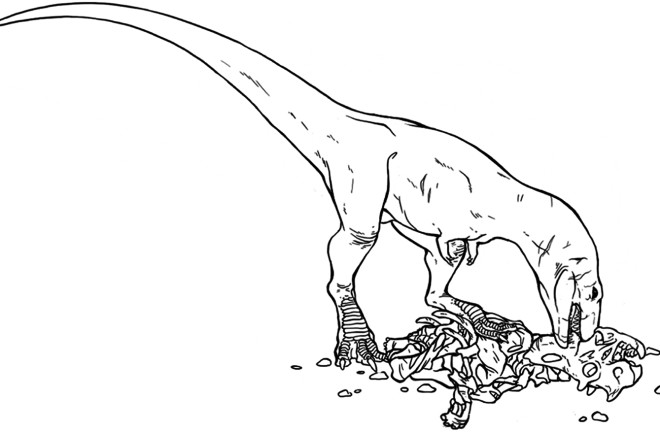 A reconstruction of a young Gorgosaurus eating the ceratopsian. (Credit: Marie-Hélène Trudel-Aubry)

As heavily armored as Triceratops and its cousins often were, they were far from invulnerable. That’s apparent in a new fossil scientists have unearthed from a juvenile member of the horned dinosaurs. It’s got obvious bite marks in it that might have come from a tyrannosaur or raptor.

Paleontologists examined a fossil roughly 76.5 million years old excavated from the badlands of Dinosaur Provincial Park in Alberta, Canada. The specimen belonged to a ceratopsian, the herbivorous dinosaurs that included three-horned Triceratops and spike-frilled Styracosaurus.

Nibbling on a Frill

Specifically, the roughly 3-inch-long, half-inch-thick fossil was likely part of the bony frill of a ceratopsian known as a centrosaur.  “The big ones had skulls well over a meter long and a typical adult would have been about 6 meters in total length,” said study lead author David Hone, a paleontologist at Queen Mary University of London. “They had a big curved nose horn, only tiny brow horns and a fairly complex frill of spikes. Ecologically, they were low browsers of tough plants.”

The size and structure of the fossil suggested that it belonged to a juvenile centrosaur. “It would have been about 4 meters long,” Hone said. “That’s pretty big, but they get much bigger.”

A number of marks on the fossil apparently came from bites. These marks do not match known bite marks from crocodilians, lizards or mammals known from this place and time. Instead, the clearest bite marks came either from the very thin, blade-like teeth of a large dromaeosaur — the feathered predators often known as raptors — or the broad, deep teeth of a young tyrannosaur.

“There are two sets of tooth marks, and these might have been made by different animals,” Hone said.

Based on the nature of the bite marks, the researchers suspect they came from a scavenger. The frill “is an area that would normally have no real muscle and only a bit of skin, so not something most predators would try and take even if they had days to feed on the rest of the body,” Hone said.

These are the first known bite marks found on the fossil of a juvenile ceratopsian, and it helps paleontologists better understand how the dinosaurs of the time interacted with each other. “Juveniles are rare generally in the fossil record, so while we think a lot of them likely got eaten and we might expect to see bites on them, because they are rare, getting evidence of bites on a non-adult is rare,” Hone said. “It’s nice confirmation that bites were not just happening on adults.”