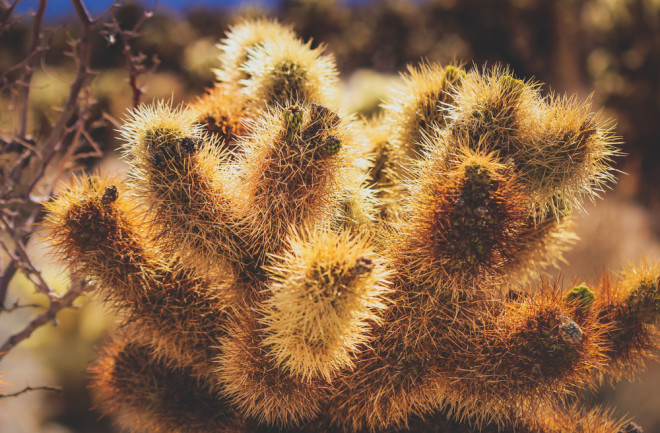 As anyone who’s gotten too close to a jumping cholla cactus can attest, the experience is singularly painful — and difficult to resolve, as the cactus’ spines are particularly stubborn to remove.

Cactus spines have many functions, from protection to the collection of vital water in dry climates, but some are so much harder to remove than others. Now researchers have found out why.

Stephanie Crofts and Philip Anderson of the University of Illinois put the spines of six species of cactus to the test to see how the spines’ structure affects their function, including their ability to puncture animal skin. Their results, published in the Proceedings of the Royal Society B, show that the microstructural traits that improve a spine’s ability to puncture flesh also increase the level of difficulty required to remove it.

In particular, cholla and other barbed cactus spines have a structure similar to porcupine quills, with shingled, overlapping barbs. These barbs fracture flesh and catch in it more easily than non-barbed spines.

“The barbs catch on your muscle fibers, making it difficult to remove them,” Anderson said in a press release.

In addition to jumping cholla, the pair tested golden barrel cactus, brittle prickly pear and a few other common cactus species. After examining each plant’s spines under a scanning electron microscope to determine its structure, they punctured skinless chicken breasts, pork shoulders with the skin left on, and a series of rubbers with varying densities. Their tests revealed that barbed spines act as sharp blades, which allows them to puncture skin easily.

“In order to puncture effectively, the cholla spine has to be able to penetrate the target very easily, so that just a slight brushing is all it takes,” Anderson said. “At the same time, it has to be really hard to remove.”

A close-up view of a Cholla spine shows its overlapping barbs, which make these spines particularly difficult and painful to remove. (Credit: Nebarnix/Wikipedia)

A close-up view of a Cholla spine shows its overlapping barbs, which make these spines particularly difficult and painful to remove. (Credit: Nebarnix/Wikipedia)

When they were removed from the chicken breasts, barbed spines — such as cholla — came out with a coating of tissue. By contrast, they came out of the pork samples clean but missing some of their barbs, which the researchers presume were left behind in the flesh.

Of the spines tested, those of the plains prickly pear required the most work to remove from chicken breasts. The cholla spines, on the other hand, were hardest to remove from pig tissue; testing showed that a single cholla spine could hook into flesh effectively enough to lift half a pound of pork by the skin.

That’s pretty frightening — and also a bit ingenious. Cholla spines serve an additional purpose: reproduction. When a person or animal brushes against a cholla, the spines hook into their muscle fibers so effectively it often pulls off a chunk of the cactus, which is then transported to a new location and can begin growing as a new plant.

What a way to take “no pain, no gain” to heart.