This Is Why Some Bats Have Hairy Tongues 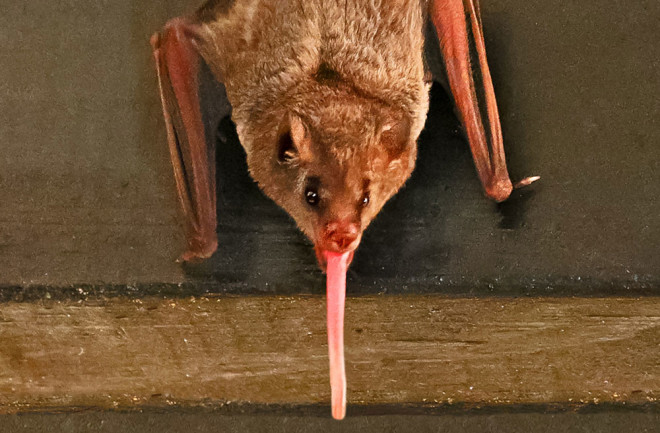 (Wikimedia Commons) Nectar-drinking bats possess hairy tongues, and now scientists reveal these hairs are designed to maximize how much sweet nectar the bats can guzzle. The South American Pallas' long-tongued bat, Glossophaga soricina, dips its long tongue in and out of flowers while hovering in mid-air, and the hairs on its tongue apparently helping it collect nectar that pools at the bottom of the blossoms. Other animals, such as honeybees and mouse-like marsupials, known as honey possums, native to Australia similarly possess hairy tongues, but it remained unclear just how much these hairs helped them out with drinking. Mechanical engineer Alice Nasto at MIT and her colleagues previously investigated the way fluid flows over and through hairy surfaces to find out, for instance, that fur coats that entrap insulating pockets of air might one day help keep divers warm under water. This work led them to explore other intersections of hairy surfaces and fluid mechanics. To investigate how hairs might help bats drink, the scientists created models of hairy tongues. They used laser-cut acrylic molds to create silicone rubber artificial tongues that were each a little smaller than a business card. They were covered with hairs each less than 3 millimeters long and roughly three times the average width of a human hair. After dipping these strips in baths of silicone oil, the researchers slowly retracted them, taking high-speed videos of how much fluid drained from each artificial tongue. Nasto and her colleagues Pierre-Thomas Brun and Anette Hosoi detailed their findings online this week in the journal Physical Review Fluids. The experiments revealed that hairy tongues captured 10 times more fluid than hairless tongues. The scientists found that the more closely hairs are packed together on tongues, the narrower the channels between them become. This slows the rate at which the fluid drains away from them, thereby trapping the liquid long enough for the bats "to get their tongues back in their mouths full of nectar," Nasto said. However, if hairs are packed together too densely on tongues, "there isn't much space left for nectar to occupy," Nasto said. The hair densities seen on bat tongues "hit that sweet spot between dense enough and too dense," she explained. The researchers also investigated the hair densities of honeybee and honey possum tongues. As was the case with the bats, the hairs on the tongues of these animals "are spaced pretty close to optimal given the speed of their tongue dipping and retraction and the viscosity of nectar," Nasto said. Future research could shed light on how the bats remove the nectar from their tongues after they collect it. "I have a hunch that it probably involves some interesting fluid mechanics," Nasto said. "Efficiently scraping of fluid off a surface is actually quite a complex problem."