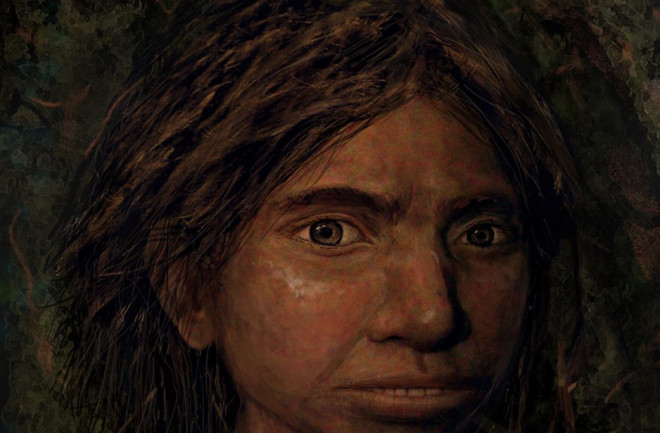 This is an estimate of what Denisovans may have looked like, based on a new DNA analysis technique. (Credit: Maayan Harel)

Every time archaeologists pry the remains of a newly-identified human ancestor from the earth, there’s one question we care about most: What did they look like? For the first time, researchers have tried to answer that burning query about Denisovans, one of the most intriguing ancient relatives on our family tree.

Discovered in 2010 in a Siberian cave, these ancient humans have begun to reveal tantalizing hints of their past in recent years. They interbred with both humans and Neanderthals, for example, and spread from Siberia to Indonesia before going extinct around 40,000 years ago.

Now, using ancient DNA, the researchers say they’re able to compare 32 specific physical characteristics from Denisovans with those of Neanderthals and modern humans. The resulting list gives us an idea of how the ancient humans evolved over time, as well as a hint of what a Denisovan looked like.

Looking Denisovans in the Eye

The comparisons, published today in the journal Cell, come with a reconstructed skull showing what the Denisovan face and head might have looked like 400,000 to 40,000 years ago. Our extinct relative, the researchers suggest, probably had thicker ribs and a larger chin like Neanderthals, as well as the widest head from temple to temple.

These predictions come from a new method of analyzing ancient DNA, which they extracted from a finger bone and tooth. Importantly, the paper also shows how this tactic could be applied to ancient DNA from other extinct human relatives to help sketch them as well.

“The biggest problem with ancient DNA is that there’s just nothing left,” says coauthor David Gokhman, who is now in a post-doc program at Stanford University. The material decays into fragments over time. “But actually, we realized that we can use this degradation to our favor.”

A comparison of Denisovan, Neanderthal and human skulls based on traits the researchers were able to pick out using ancient DNA. (Credit: Gokhman et al./Cell)

The lab studied the DNA for footprints of methyl groups — structures that turn genes off. Previous research by another coauthor, Liran Carmel, and other colleagues found that DNA hosting these silencing units degrades differently than genetic material that doesn’t. A scan of the Denisovan DNA for these degraded genes mapped which had been inactivated and which had not.

Some of the genes the researchers identified are also in a human genetic disease database. The library includes information about how 2,287 illness-associated genes — which are often mutated and no longer working — affect 1,685 skeletal and dental physical characteristics. If turning a human gene off produced a bodily change, Gokhman says, they reasoned that a similar alteration would appear in Denisovans with that gene turned off by methyl groups. Comparing the two databases of silenced genes gave them a rough idea of some basic Denisovan physical features.

The researchers do caution their depiction of a Denisovan face is just an estimate. The skin and hair color is also an approximation because the source DNA only came from bone and teeth cells. Gokhman says they could only reliably discern characteristics from those two body systems. Additionally, the team could only make predictions for genes found in the disease database, which doesn’t include all human-lineage skeletal genetic material.

Still, the sketch leaves a distinct impression of what Denisovans looked like. As many scientists predicted, the species likely resembles Neanderthals more than they do modern humans. Of the 32 traits identified, 21 align with their fellow extinct relative, including Denisovans’ similarly wide hips, broad rib cage and low foreheads.

A comparison of Denisovan, Neanderthal and human skeletons based on a DNA analysis. (Credit: Gokhman et al./Cell)

Better pinning down these characteristics could also help scientists find even more Denisovan bones. For example, hominin fossils from China dating back to 100,000 to 130,000 years ago might prove to be from Denisovans — scientists previously didn’t have enough information to make a definitive classification. Of the skull measurements taken from two of those unidentified individuals, four of them matched the proportions the researchers identified as Denisovan.

Gokhman and his colleagues knew that the true test of their method would be when researchers unearthed a Denisovan bone whole enough to measure. That moment came sooner than expected, just as their own work was undergoing edits. This May, scientists announced they’d found half a Denisovan jaw. When Gokhman saw the news, he dove into the study and found that seven of the eight bone qualities his research had predicted for Denisovans were correct.

The last-minute mandible find, he says, “really shows that our profile matches the concerned fossil in the right direction.”

The method might have far more to show us about our ancestors as well. Gokhman’s co-author (and PhD advisor) Carmel is already applying the method to compare entire populations of ancient and modern humans to learn how we’ve adapted to the environment.