This Is the Oldest Tree in Europe 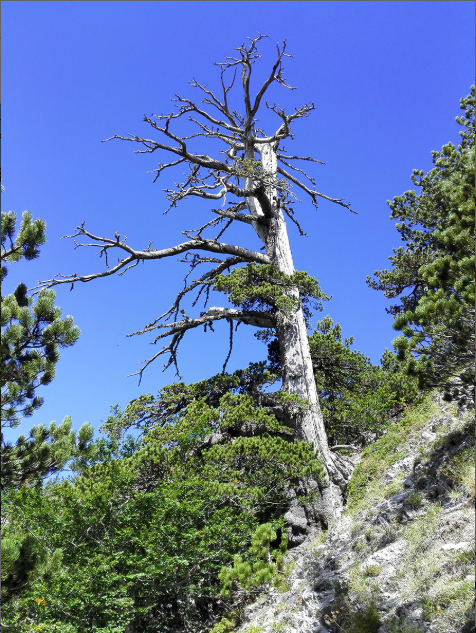 This tree is not dead, despite appearances. It's alive and happy, and it's been clinging to this cliff in southern Italy since the eighth century A.D. Researchers invented a new dating method to figure out that the pine is the oldest known tree in Europe. Gianluca Piovesan of Università della Tuscia in Italy and colleagues spent three years taking samples from trees to try to find some really old ones. On mountain cliffs within Pollino National Park, they found a few trees that seemed to be a thousand years old or more. The most elderly individual they discovered was a conifer called a Heldreich's pine; the researchers nicknamed it Italus. Italus's spiky, dead top part and the patchy green growth in its midsection are typical of very old conifers, the scientists write. Also typical is its hollow trunk, decayed with age. That makes it impossible to use a core sample to count the tree's rings, all the way to its center, and find out how many years it's lived. Counting back to the innermost ring of Italus, the researchers got to the year 955. But they didn't know how many rings were missing from the trunk's hollow center. Italus is 160 centimeters in diameter, or about 5 feet and 3 inches. The hollow section is almost 48 centimeters (1.5 feet) wide. Since tree rings vary in thickness depending on growing conditions, though, the scientists couldn't know exactly how many rings were missing. They also took cores from some of Italus's roots, conveniently exposed by its precarious growth on the cliff face. The roots had grown at different points during the tree's life. The researchers used radiocarbon dating to assign approximate ages to these root samples, then used overlap between the ring patterns in the roots and ring pattern in the trunk to puzzle together the whole chronology of the tree. Their new method showed that the tree's oldest ring comes from 789 A.D., making the tree 1,230 years old this year. Although Italus is ancient, it's a whippersnapper compared to the oldest trees in the world. These are Great Basin bristlecone pines in California and Nevada, the oldest of which has been alive for more than 5,000 years. Photo: Gianluca Piovesan