This Flower May Make Multicolored Pollen Just to Please Bugs 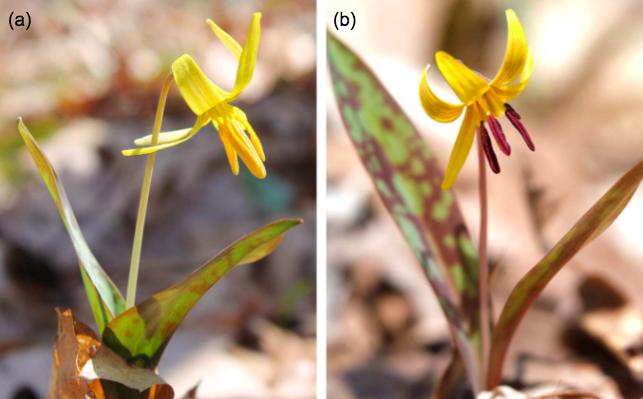 The trout lily is a North American spring wildflower that's cuter than its name suggests. Dappled leaves frame a little yellow blossom that keeps its face shyly toward the ground. Inside the bloom, the flower's anthers and pollen vary from bright yellow to dark red. Researchers could find no purpose for the different colors—except, maybe, to satisfy the whims of pollinating insects. Plenty of flowers come in multiple petal colors, and other research has explored the reasons, write University of Ottawa biologist Emily Austen and her coauthors. Different petal hues may help a plant deter hungry grazers, attract pollinators, or survive in different environmental conditions. But there's been less research into why some flowers' sexual organs vary in color, Austen writes. The trout lily, Erythronium americanum, is a striking example. To explore why these flowers bother with multicolored pollen, the researchers started with a citizen science project. They asked people to report on the color of trout lily anthers where they lived. Did the anthers of all the flowers they saw appear red or orange? Did they all appear yellow? Were they a mix? More than 180 citizen scientists participated, uploading data on more than 250 trout lily populations. When the researchers put all the data onto a map and looked for patterns, they found...nothing. There were no geographic trends. Certain latitudes, longitudes, or elevations didn't make trout lilies any more likely to have reddish or yellow pollen. The researchers next tried a series of experiments on the flowers. They repeated these experiments at eight sites in the United States and Canada where trout lilies grew in both pollen colors. In one experiment, the researchers tested whether pollen-eating beetles were more attracted to red or yellow pollen. They captured beetles and put them in little cages with flowers of both types. But the beetles ate both colors equally. In another experiment, the researchers tested whether the pigments in either pollen color were better at protecting the pollen from UV radiation. But after sitting under a UV lamp, both types of pollen were still equally viable. In yet another experiment, the researchers painstakingly pollinated flowers by hand, then put bags around them to keep pollinators out. Both pollen colors worked equally well to fertilize flowers and produce fruit. There was only one experiment that showed a difference between red and yellow pollen. The researchers set up grids of cut flowers at each of the eight sites, then recorded every pollinating insect that visited: honeybees, bumblebees, solitary bees, flies. There were no large-scale patterns. But locally, some pollinators played favorites. For example, at two sites, flies preferred flowers with yellow pollen. Solitary, pollen-eating bees preferred red at one site, and yellow at another. "This last preference is neat, because the same group switches its preference between sites," Austen says. She has a few ideas about why pollinators might show local preferences for one color or the other. Within the larger categories of pollinators she studied, certain species that have a strong preference might be more common at certain sites. Or pollinators' preferences might depend on what other species are flowering nearby, or what proportion of trout lilies at the site have red or yellow pollen. If the local whims of pollinating insects vary from year to year, Austen says, that could help explain why trout lilies keep making two different pollen colors. But the question is far from resolved, she says. "The forces maintaining pollen color variation in trout lily remain a mystery." Images: (left) Emily Austen; (right) Shang-Yao Lin