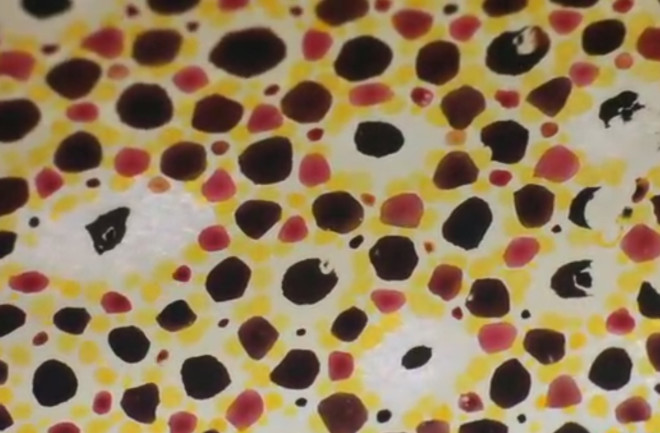 Chromatophores allow an octopus to blend in with all manner of underwater backdrops. (Credit: Roger Hanlon)

Bet you can't spot the octopus in this video.

When marine biologist Roger Hanlon caught this creature on camera, he said he screamed bloody murder. And no wonder. Did you see that thing appear out of nowhere?!

After a decade of further research, Hanlon still doesn't know how the eight-armed animal pulled it off. Hanlon and his colleagues at the Marine Biological Laboratory in Woods Hole study a group of underwater creatures called cephalapods, which includes octopi like this one, as well as squid and cuttlefish.

In particular, the researchers are trying to figure out how these squishy, tentacled species pull off some of nature's most impressive feats of camouflage. "No one comes even close to the speed and diversity of appearances," he told the host of the Science Friday radio show. These inkfish can match the color and texture of their surroundings in fractions of a second by changing the size and shape of dynamic spots of pigments on their skin called chromatophores.

Some combination of these expandable chromatophores and reflectors underneath them allows an octopus to blend in with vegetation, rocks, or smooth surfaces almost imperceptibly. Hanlon has been studying these animals for years, and is still in awe of their camouflaging stunts.

"The amazing thing is that these animals are color blind yet they are capable of creating color-match patterns," Hanlon told Science Friday, "But we don't know how."

So, when science can't tell us how something works, all we can do is be amazed. Watch the video again and revel in how awesome this tricky octopus is. It won't get any more obvious, we promise.