This Chinese turtle urinates through its mouth (sort of) 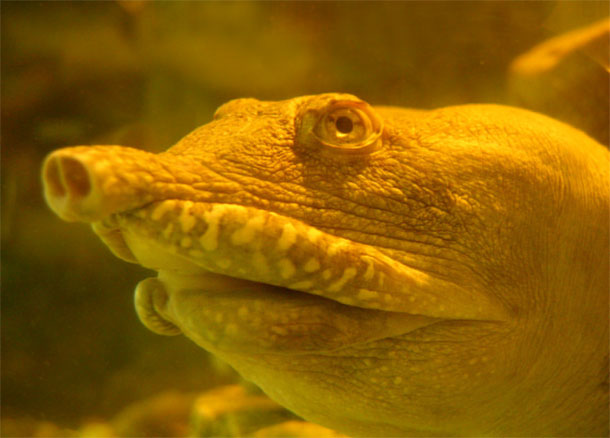 The Chinese soft-shelled turtle looks like someone glued the snout of a pig onto the face of a fish, with the texture of a scrotum for good measure. But its bizarre appearance pales in comparison to an even more bizarre, and newly discovered, habit: it expels waste through its mouth. When the turtle breaks down proteins in its liver, it ends up with an abundance of nitrogen, which it expels from its body in the form of urea. Humans are the same—we get rid of urea in the form of urine, via our kidneys. But the soft-shelled turtle has an altogether different route. It’s well-adapted to life in the water, and lives in salty swamps and marshes. But Yuen Ip from the National University of Singapore noticed that when the turtle emerges from water, or is stranded on land during dry spells, it will plunge its head into puddles. While submerged, it rhythmically expands and contracts its mouth. Ip found that the turtle gets rid of most of its urea through its mouth rather than its kidneys, via gill-like studs in its mouth. It can breathe and get rid of waste through the same structures. [Update: Note the comments below. Urine is more than just dissolved urea, so while the stuff the turtle spits out is similar, it's not quite the full deal.] It’s not hard to get a hold of Chinese soft-shells in east Asia – they’re raised on several farms and millions are sold in markets as pets or food. Ip bought some for research instead, picking them up from a wet market in Singapore’s China Town. He put them in dialysis, placing them in water and collecting the urine from their rear ends. He also measured the total levels of urine in the surrounding water. Ip found that just 6 percent of the urea that the turtles produces was ejected via their kidneys. The rest came out through the mouth. When Ip gave the turtles a chance to dip their heads in water, he found that they can sit there sucking, swilling, and spitting out the liquid for up to 100 minutes. This oral route gets rid of urea between 15 and 50 times faster than the kidneys. The turtle’s mouth contains rows of tiny studs that are thought to behave like gills, which supplement the animal’s lungs when it stays underwater for protracted bouts. Ip showed that these same studs are also littered with urea transporters – proteins that flush urea out of cells. These proteins are closely related to those found in the kidneys of other turtles. But it’s absent in the Chinese soft-shell’s kidneys; instead, it’s all over the inside of its mouth. And as a result, the level of urea in the turtle’s saliva is a “phenomenal” 250 times greater than that in its blood. Fish share the same trick – they too can get rid of urea through their gills. But why is this turtle the only other back-boned animal that does so? Ip thinks the answer lies in its salty habitat. To urinate through the normal kidney route, the turtle would need to constantly drink more water to make up for what it lost. And because the surrounding water is so salty, they would soon build up toxic levels in their bodies (especially since reptile kidneys are atrocious at getting rid of unwanted salts). The Chinese soft-shell has evolved to deal with this problem through oral urination. It doesn’t need to drink anything. It just gargles some surrounding water and spits out its waste. Reference: Ip, Loong, Lee, Ong, Wong & Chew. 2012. The Chinese soft-shelled turtle, Pelodiscus sinensis, excretes urea mainly through the mouth instead of the kidney. J Exp Biol http://dx.doi.org/10.1242/jeb.068916Images by Monika Korzeniec