This Bird Can Fly for Six Months Without Landing Once 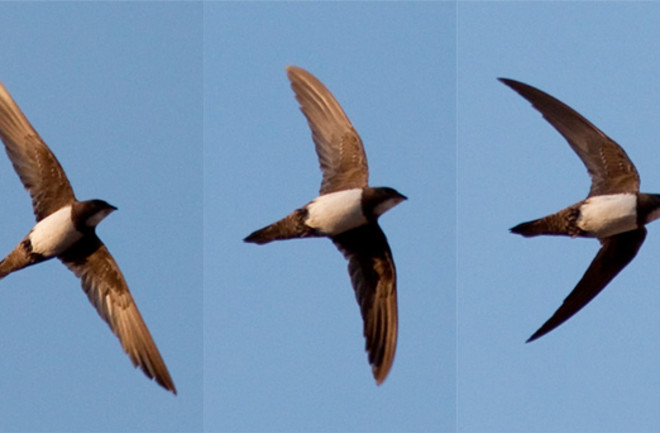 Alpine swifts weigh just under a quarter-pound, glide along on a nearly 22-inch wingspan—and, it turns out, sleep while airborne. For the first time, researchers have documented that the birds can stay aloft for more than six months at a crack.

Swiss researchers tagged six Alpine swifts with light-sensitive and movement data monitors, starting from their breeding grounds in Switzerland. The birds spent the next year flying south, hanging out in western Africa and heading back north, with a pit stop in northern Africa and Spain, before returning to Switzerland.

While migrating south to Africa the birds would stop occasionally. But once they reached their wintering site, landing wasn’t part of the plan. The data showed that these birds stayed aloft for 200 days.

Asleep on the Wing

This is the first tangible confirmation of the Alpine swift’s soaring stereotype, as Ed Yong reports:

Their skill is so great that many textbooks claim that common swifts can stay on the wing for their entire lives, landing only to breed and incubate their chicks. But this claim is based largely on European radar-tracking studies, which showed that the birds often fly throughout the night — hardly convincing evidence. “No one had ever proven it by following individual birds,” says [Felix] Liechti [of the Swiss Ornithological Institute].

By using tiny sensors, Liechti’s team could determine whether the birds were moving about in daylight or darkness, and measure the angle of their movement, or pitch. Soaring involves very little pitching in the wings, whereas pitch increases dramatically while birds are perched and moving about. Smithsonian Magazineexplains:

The new finding was, in part, enabled by developments in technology — this was the first time that this particular kind of sensor, developed at Bern University, was attached to birds for research. Its tiny size allowed the researchers to attach it to relatively small birds without interfering with their free movement.

The study, reported today in Nature Communications, shows that as the Alpine swift is soaring high, it can still munch on tiny insects, zonk off and be refreshed enough to make the more than 3,000-mile journey back home.