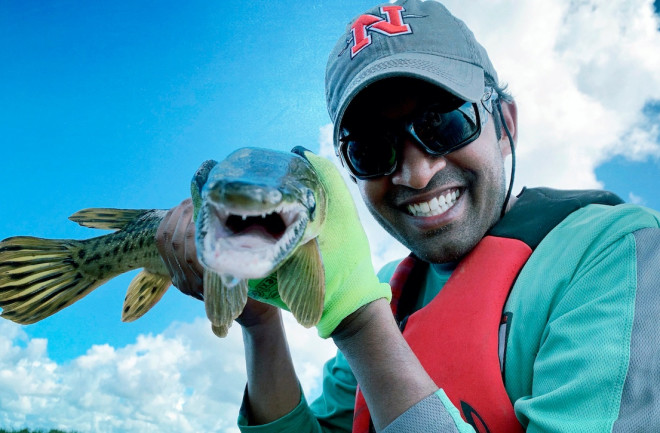 Sharp teeth and pointy snouts plaster the walls and bookshelves of Solomon David’s office at Nicholls State University, nested among the bayous of southern Louisiana. It’s like walking into a gar museum — perhaps the only such in the world. The prehistoric fish that adorns the walls looks like an alligator that has fins instead of feet, a long, narrow snout and armored, diamond-shaped scales. A small stuffed animal gar, custom made from a woman in the U.K. who makes scientifically accurate paleo plushies, sits behind David’s computer chair. Multiple gars from Mexico are mounted on the walls; there, gar is a regional delicacy known locally as pejelagarto — a portmanteau of the Spanish words for “fish” and “lizard.” Next to a whiteboard hangs a framed spread depicting a gar swimming in a river, from the children’s magazine Ranger Rick.

David sits in middle of this ad-hoc gar display, a lively researcher in his early 40s whose hands move almost as fast as his mouth. His enthusiasm for primitive fishes — living representatives of ancient lineages that were around hundreds of millions of years ago — is infectious. But David wasn’t always interested in prehistoric fishes; it was dinosaurs that initially gripped his interest. “I was always into the more unusual-looking organisms,” he remembers. When he moved from North Dakota to Ohio as a child, he happened upon an issue of a nature magazine — the very same Ranger Rick now adorning his office wall. In the middle of the magazine was one of the most unusual organisms he had seen. He was fascinated to find out that these dinosaur-looking gar fish were real, present-day creatures.

The spotted gar is one of seven species worldwide. It lives across a wide swath of North America. (Courtesy Solomon David)

He built a career out of that fascination — which has only benefited the gar. Historically somewhat of an underdog fish, the gar’s fearsome looks and indiscriminate feeding habits have given it a bad reputation among sport anglers and wildlife officials. “In certain states, if you caught a gar, you were not allowed to return it back to the water alive,” David says. “You were required by law to kill it because people thought that they were ruining the habitat or the population of other game fish like largemouth bass or perch.” In Iowa, for instance, this law remained in effect through the 1980s.

But the gar, which scientists including Charles Darwin have referred to as a “living fossil,” has many traits useful for research into human and ecosystem health. David is determined to make sure the rest of the world knows about them.

David runs down a list of interesting facts about the gar: Their ancestors first appeared around 157 million years ago during the late Jurassic period, even before the Tyrannosaurus rex. They have retained certain characteristics that don’t exist in other modern-day fish, such as salmon — for example, their chainmail-like armor of thick scales. And they are genetically much closer to humans than other fish species, such as zebrafish, which David calls the “lab rats” of fish in biomedical research. This last point is especially important; using gar for medical research could potentially open up a slew of interesting insights into human development and disease formation.

David is working with evolutionary scientists to help make gars a viable model species for scientific research. With a team of (almost) equally enthusiastic graduate students, David is figuring out ways to more efficiently breed gars in the laboratory to gain a better supply of gars and gar embryos. While species of the fish exist as far north as Canada, wild populations of gar prefer slow-moving, often brackish rivers, and are abundant in the floodplains and bayous that surround the university.

“Louisiana has this vast natural resource concentrated here that you don’t get in a lot of other places,” David says. “We are kind of like the boots on the ground. We get out there, we can get the fish, and we can send those embryos out to other labs.”

While acceptance of gar as a natural and important part of the ecosystem is growing, some species, like the larger alligator gar, are still threatened or even endangered in some states. Outside of his official research, David’s enthusiasm is channeled into educating the general public about the awesomeness of these prehistoric fishes.

And like many scientists, David is guilty of taking his work home — except in his case, he does it quite literally. Today, his home aquarium houses all the different species of gar, from the 2-foot-long spotted gar to the alligator gar, which can grow to more than 8 feet in length. At one point, he was keeping the fish in a room that was later converted to his daughter’s nursery. “My wife and I used to joke that she was probably the only person to ever grow up with all seven species of gars in the room,” he says. If David has his way, she will not be the last.

Dolphins Reveal the Health of the Gulf of Mexico