These Termite Mounds Are 4,000 Years Old — And Still In Use 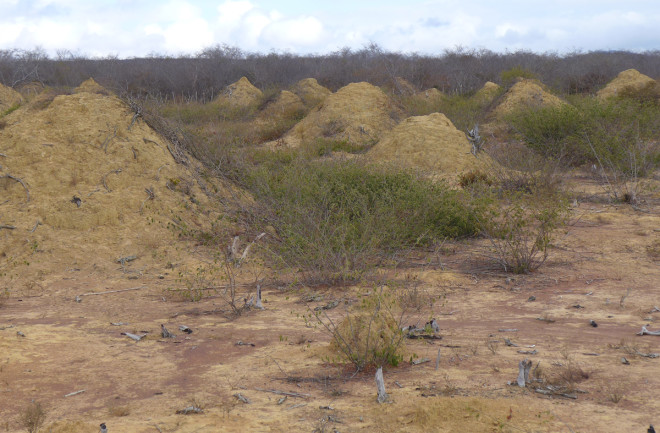 This image shows mound fields. The mounds are found in dense, low, dry forest caatinga vegetation and can be seen when the land is cleared for pasture. (Credit: Roy Funch)

Two hundred million mounds of dirt dot an area about the size of Great Britain in a tropical forest in northeastern Brazil. The cone-shaped dirt piles are roughly twice as tall as the average American man and stretch 30 feet across at the base. The mounds, the work of countless generations of termites, rise from the earth every 65 feet or so and are visible from space.

These mounds, as tall as skyscrapers to the insects that made them, aren’t just massive, they’re also incredibly ancient, an international team of researchers has found. The artificial hills have existed for nearly as long as the Pyramids of Giza.

“This is apparently the world’s most extensive bioengineering effort by a single insect species,” Roy Funch, a biologist at the Universidade Estadual de Feira de Santana in Brazil, who co-led the new research, said in a statement. “Perhaps most exciting of all — the mounds are extremely old — up to 4,000 years.”

The termites that built the ancient mounds—known in scientific circles as Syntermes dirus—still use them today, Funch and colleagues found. But unlike many termite-engineered wonders, the S. dirus termites of Brazil do not use the mounds as nests. Instead, the researchers propose the monumental mounds are actually heaping piles of waste.

Over the last few thousand years, the termites dug out a vast network of underground tunnels. The subterranean system allows the insects to venture out onto the forest floor to get food (they live on a high-fiber diet of dead leaves) while minimizing the risk becoming a meal.

In the process of constructing the web of narrow tunnels, the termites moved more than 10 cubic kilometers (that’s more than 2.6 trillion U.S. gallons) of earth, a volume roughly equivalent to 4,000 Great Pyramids of Giza, the researchers report today in the journal Current Biology. The termites discarded material from tunnel construction into these uniformly shaped and massive mounds via a single passage approximately four inches wide that runs up the center of each debris pile.

To find out how old the mounds are, the researchers collected soil from the middle of 11 mounds. Then they dated the dirt with an approach called optically stimulated luminescence. The method uses blue or green light to trigger the release of ionizing radiation from mineral grains within the soil, and the amount of radiation emitted gives them an estimate of how long ago a mineral was exposed to the sun.

The termites’ engineering feat “represents one of the biggest structures built by a single insect species,” Stephen Martin, an entomologist at the University of Salford in the United Kingdom, who co-led the study, said in a statement.

“It’s incredible that in this day and age you can find an ‘unknown’ biological wonder of this sheer size and age still existing with the occupants still present,” Martin said.