Big differences between the physiques of males and females could indicate polygamous mating choices in early humans. 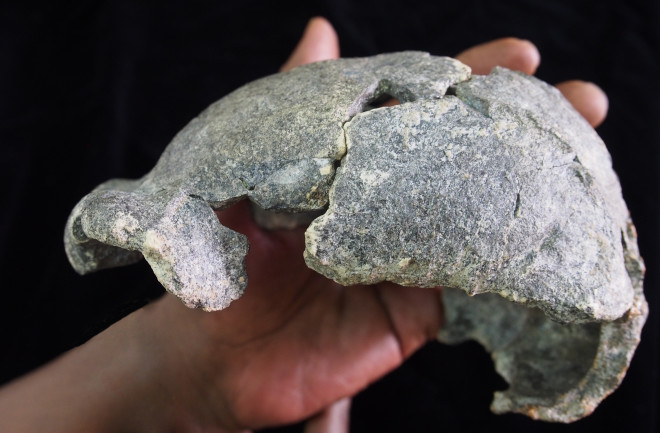 On an archeological dig, finding remains from ancient, early humans is always somewhat surprising. Yet that initial thrill gets a serious boost when researchers unearth the smallest fossil found thus far from a particular species.

That’s exactly what happened when archeologists recently discovered the smallest known Homo erectus cranium in Africa. And the skull, recovered in Ethiopia, sat a few miles from where they also found a similar, larger skull with slightly sturdier features, according to a report published this week in Science Advances. Archaeologists working on this project think these two skulls both came from the same kind of early human, H. erectus, and indicate that the species showed distinct differences between the sexes.

Physical differences between males and females might speak to the early humans’ mating habits, writes study co-author Michael Rogers, an archaeologist with Southern Connecticut State University, in an email to Discover. This finding might revive a conversation anthropologists have been having for years. “The [small skull] could reopen a debate about how much variability there is likely to be within a single species of human ancestor,” he says.

So Close, Yet So Far (Apart In Size)

H. erectus is one of the early humans that looked a lot like we do now, with shorter arms than legs and a body that likely had an easier time walking upright than scampering up trees. This predecessor of ours died out just over 100,000 years ago. Archaeologists had previously found some of their remains, like pelvis bones, in Afar, Ethiopia, at a dig project that’s been operating for over 20 years.

Two excavations, each at slightly different parts of the same study area, recently revealed a skull each. The smaller set of skull fragments dates back to about 1.5 million years ago, while the larger cranial pieces are a little younger, about 1.25 million years old. Side by side, it’s obvious how different the two skulls are in size, Rogers says. Based on the size of the fragments, the archaeologists think the smaller skull held about 36 cubic inches in volume — whereas the larger version held about 50 to 55 cubic inches.

If both skulls are H. erectus — which the researchers think they are — that size difference could be similar to the discrepancy between male and female chimp or gorilla skulls, Rogers says. Most primates with significant size differences between the sexes are also polygamous, he adds, meaning they have more than one mate at a time.

Who Do These Belong To?

The authors also acknowledge that it might be possible that the smaller skull belongs to a different species of early humans altogether. It’s also possible that, because there’s a quarter of a million years separating the two specimens, the younger, larger brain is a more evolved version of the smaller one.

However, hints of size differences between the sexes appear in other pre-human primates, says paper co-author Sileshi Semaw, an archaeologist with the Centro Nacional de Investigacion sober la Evolucion Humana. Recent findings of similarly small skulls also reinforce the team’s belief that the find fits a pattern of sexual differences in body size between male and female H. erectus.

Yet these conclusions about our ancient ancestors are based on only a few skulls. The best way to gain confidence is to find more skulls, Semaw says, which requires more fieldwork. And as archaeologists recover more and more braincases, “there’s still a good chance that a new discovery will tell us something we didn’t know before,” Rogers adds.