These Sea Creatures See Without Eyes — But Only Sometimes

Brittle sea stars use light-sensitive cells spread across their bodies to navigate. 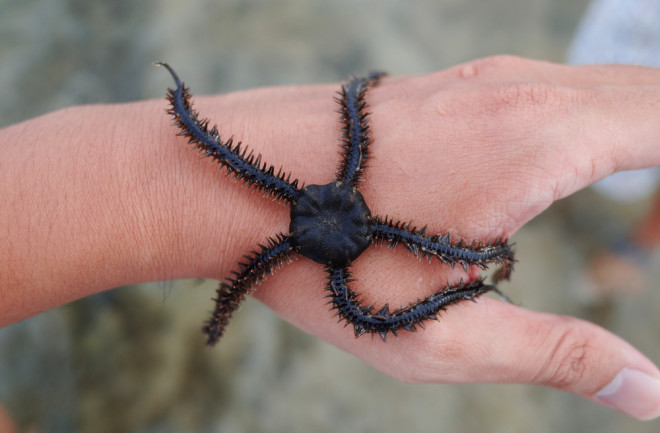 A brittle star. A different species was found to have light-sensitive cells covering its body, allowing it to see without eyes. (Credit: Han-Lin/Shutterstock)

How do you see without any eyes? If you're a brittle star, you use your body.

Researchers find that these sea creatures, relatives to starfish, rely on light receptors dispersed throughout their bodies to find their way around the seafloor. Their light-sensing abilities help them find their way toward shelter and the darkness — and the safety it offers.

It makes these brittle stars the first of their kind to demonstrate a sense of sight, according to a paper published in the journal Current Biology. But there's a strange catch to the stars' visual powers: They can only see when they turn red.

We typically associate sight with eyes. But an organism may not need distinct sight organs to see. For over a decade, biologists have suspected that brittle stars and sea urchins “see” with light-sensitive cells covering their bodies.

Recent research has confirmed that one species of sea urchin does have a degree of light sensitivity. The find made a team of researchers from the U.K., U.S., Germany and Sweden curious if the same could be said for the spindly brittle stars.

In tests in the lab, the researchers found the brittle stars could indeed navigate using light. But when the lights went out, they suddenly lost the ability. The researchers think it comes down to their pigmentation.

This species of brittle star, Ophiocoma wendtii, is unique in that it transitions from red to beige once the sun goes down. Indeed, the only consistent explanation for their sudden loss of navigation skills was the pigment change, the researchers found. Even when they turned the lights back on, the now-beige brittle stars couldn't find their way around. It's an indication the brittle stars' red pigment might also be enabling them to sense light.

It's not quite clear how the pigments and sense of sight are related, though the researchers do note that pigments in the eyes of other species help them to see by filtering light. Something similar could be happening in the light-sensitive cells of brittle stars.

The scientists have partially answered one question, but another remains. Brittle stars don’t have central nervous systems like humans and other organisms, so how they integrate light sensitivity signals from all over their limbs and move their body in response is an entirely different scientific mystery.