These plastic-eating worms could be the solution to pollution. 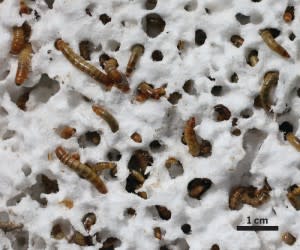 We all know that plastic is generally terrible for the environment because it doesn't biodegrade, and just sits in landfills. (Or even worse, gets tangled around some poor animal's neck!) Fortunately, the lowly mealworm may hold the answer. As these scientists report, the worm Plodia interpunctella contains bacterial strains in its gut that are capable of breaking down polyethylene, the most common form of plastic (found in grocery bags, plastic bottles, and much more). Now if only we could figure out how to host these bacteria in our own guts, and simply eat our food packaging instead of throwing it away...Evidence of Polyethylene Biodegradation by Bacterial Strains from the Guts of Plastic-Eating Waxworms "ABSTRACT: Polyethylene (PE) has been considered nonbiodegradable for decades. Although the biodegradation of PE by bacterial cultures has been occasionally described, valid evidence of PE biodegradation has remained limited in the literature. We found that waxworms, or Indian mealmoths (the larvae of Plodia interpunctella), were capable of chewing and eating PE films. Two bacterial strains capable of degrading PE were isolated from this worm’s gut, Enterobacter asburiae YT1 and Bacillus sp. YP1. Over a 28-day incubation period of the two strains on PE films, viable biofilms formed, and the PE films’ hydrophobicity decreased. Obvious damage, including pits and cavities (0.3−0.4 μm in depth), was observed on the surfaces of the PE films using scanning electron microscopy (SEM) and atomic force microscopy (AFM). The formation of carbonyl groups was verified using X-ray photoelectron spectroscopy (XPS) and microattenuated total reflectance/Fourier transform infrared (micro-ATR/FTIR) imaging microscope. Suspension cultures of YT1 and YP1 (108 cells/mL) were able to degrade approximately 6.1 ± 0.3% and 10.7 ± 0.2% of the PE films (100 mg), respectively, over a 60-day incubation period. The molecular weights of the residual PE films were lower, and the release of 12 water-soluble daughter products was also detected. The results demonstrated the presence of PE-degrading bacteria in the guts of waxworms and provided promising evidence for the biodegradation of PE in the environment." Related content: Chemists propose using ground-up earthworms (literally) as catalysts for chemical reactions.What’s worse than a colonoscopy? A colonoscopy involving an earthworm.Memories that can survive decapitation.