These Pine Trees Always Point Toward the Equator, But Why? 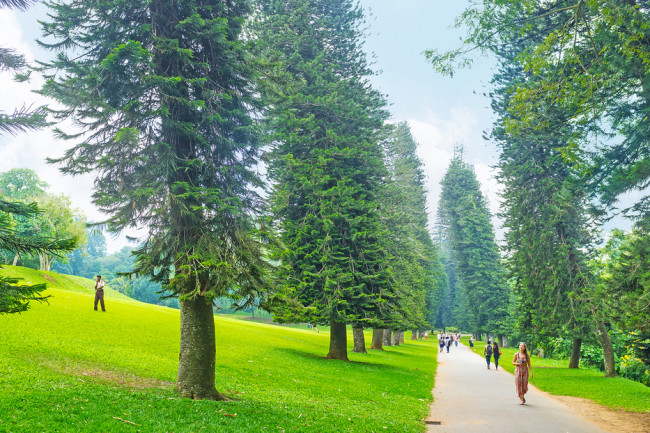 Cook Pines line a walkway in Sri Lanka (Credit: eFesenko/Shutterstock) In a world of upright trees, one species dares to be different. Cook pines, a type of tall, slim evergreen native to a remote island in the South Pacific, at first glance appear to be falling over. Many tilt precariously to the side as if caught in a heavy wind, though no breeze ruffles their foliage. Though it may seem the result of chance, observe a stand of Cook pines, especially in locations far from their native habitat, and a kind of unnerving hive-mentality emerges. The trees all lean the same way, as if commanded by some ur-pine from afar. This atypical stance went largely unnoticed by the scientific community until Matt Ritter, a professor at California Polytechnic State University, happened to question why these trees lean like they do while writing a description of them for a book. As New Scientistreports, he corresponded with an Australian researcher to see if the phenomenon extended beyond California, finding to his amazement the trees there did the same thing, but in the opposite direction. Cook pines always seem to point the way toward the equator — bending south in California and north in Australia. Intrigued, they expanded their efforts to include five continents and 256 different Cook pine trees. Their search, described in a paper published last month in Ecology, extended from near the equator to latitudes well into North America and near the tip of South America, turning up skewed pine trees wherever they went. As they neared the poles, the pines got even more tilted, contorting themselves even further to reach for the equator. On average, the trees leaned by about 8.5 degrees, although one bent nearly 40 degrees. The reason for their odd behavior is likely something common to all plants: phototropism. Just as your houseplants will stretch toward the sun, the trees are bending themselves to better catch the angled sunlight at higher latitudes. In most trees, their sensitivity to the Earth's gravitational pull, called gravitropism, counteracts their will to bend toward light, keeping them upright. Cook pines seems to lack this ability, perhaps due to their geographically restricted origins. So, if you're lost in the woods, don't bother looking to see which side of the trees the moss is growing on. Just look to the oddly bending Cook pine trees and set yourself straight.