These Monkeys Have An Archaeological Record 3,000 Years Old

Monkey fossils are normally in the realm of paleontology. But what about the tools they used? 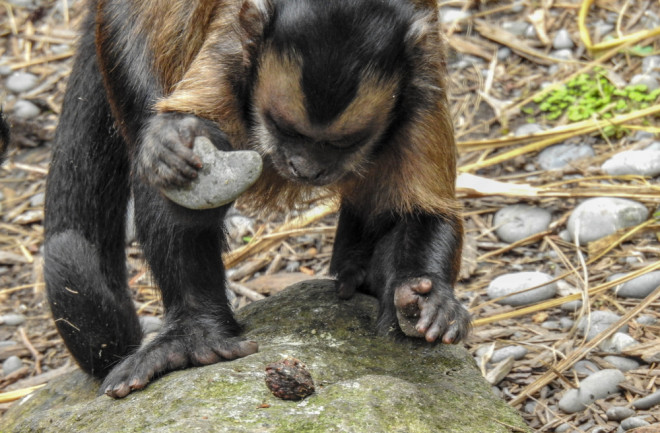 A capuchin using a stone to break open its next meal. (Credit: Lisa Crawford/Shutterstock)

This archaeological record also shows they adapted their food processing tactics over time. It’s the first time tool use stretching back thousands of years and showing evolving uses has been found outside of humans, the researchers say.

When archaeologists set out to learn how early humans lived, they often follow an ancient history recorded in stones. The stone tools our human ancestors began using more than 2 million years ago started out rudimentary. Ancient hominins would smash one stone against another to make a sharpened edge that they could then use for cutting.

As humans evolved, their tool use became more sophisticated. They became choosier about which kind of stone to use for tool-making about 1.4 million years ago, and by a million years ago, the toolbox had expanded to include chisels, anvils, and hammerstones. Ancient humans created hundreds of different kinds of tools, some of which became templates for modern tools.

Monkeys and apes are also great tool developers. Chimpanzees, macaques and capuchins have all been recorded using stones as tools. But researchers have not found any evidence to suggest primates’ tools evolved over time like ours did, until now.

In a large tree-filled valley of the Brazilian national park, an international team of researchers from Brazil and the United Kingdom recovered more than 120 stone artifacts. These tools, such as hammerstones and anvils, were used by wild capuchin monkeys — tawny, long-haired primates that sport dark walnut-colored caps and prehensile tails as long as their bodies. A streak of dark fur follows the jawline from ear to ear.

Radiocarbon dating revealed the monkeys used the valley area over four different time periods, each with distinct patterns of tool use. The earliest extended back about 2,400 to 3,000 years ago, the researchers report Monday in the journal Nature Ecology and Evolution. Compared to implements from more recent time periods, the older tools show more wear. The tools also are smaller and lighter indicating the desired food item was probably something like seeds –– small and relatively easy to access.

Then capuchins changed their tools around 300 years ago. For the next 200 years, the hammerstones and anvils were much larger than what capuchins use today. The finding suggests the monkeys’ at that time needed something more robust to open harder foods. These days, cashews, which are easier to break open, are a central part of the capuchin diet and the smaller stones they use reflect that dietary change.

The varied tool use may reflect different populations of capuchins using stones tailored for different foods over time, the researchers write. On the other hand, the stones may record a single capuchin population that used different tools depending on the food sources available. The researchers aren’t sure. But they do know the tools do not belong to humans.

The finds lack key features – such as large rocks that smaller tools had been chipped off of – characteristic of human stone tools. The site also lacks human artifacts such as ceramics or fire remnants, which are abundant at human archaeological sites within the park. But the varied and evolving tools at the site do suggest something intriguing about the inhabitants — they innovated, just like we do.