Oozing with poison and small enough to fit in a petri dish, the organoids could one day help provide sorely-needed antivenoms. 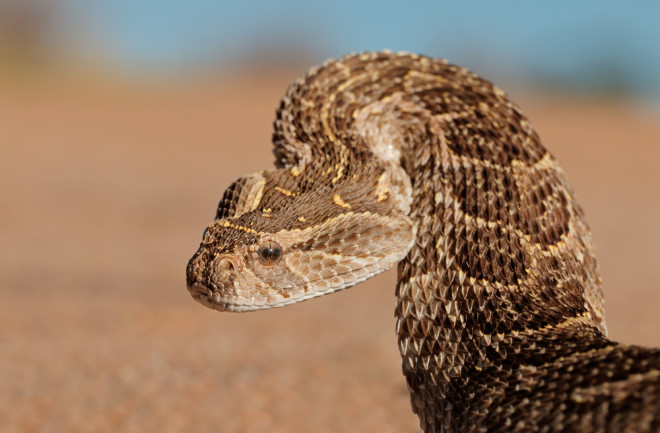 A puff adder, one of the nine species the researchers created venom gland organoids from. (Credit: EcoPrint/Shutterstock)

Friday afternoons are reserved for free-for-all experiments in Hans Clevers’ lab. He lets his students at the Hubrecht Institute in the Netherlands test out their fun ideas — which is why no one told him about the poison-producing snake glands until after they were alive and well in the lab petri dishes.

Called organoids, the collection of tiny poison glands proliferating in the lab were grown from cells from nine different snake species. The organoids, described today in a new report published in Cell, seemed frivolous at first. But the more Clevers, a molecular geneticist, learned about the challenges of snake bite research, the more he realized how useful these poison-generating life forms could be.

Snake bites kill between 81,000 and 138,000 people each year. Those in low-income, rural communities and nations with a struggling healthcare infrastructure bear most of the burden. And though snake bites are common, antivenom research is slow.

The lab-grown organoids, however, could give researchers an easily renewable source of venom help them research new ways to help treat snake bites.

"We could just sample one tissue once, and we have a source of [that snake’s] venom for eternity," Clevers says.

A Vat of Venom

Years ago, Clevers’ lab — which normally focuses on cancer research — developed a technique for growing tiny, simplified versions of mammal organs in the lab. The process involves grinding up cells from the original organ and feeding them growth hormones. The end product is a version of an organ grown entirely in the lab: an organoid.

Since the method works for mammal body parts like stomachs and livers, his students wondered if they could achieve something similar with the poison gland of a snake. The process worked, and soon, the students had several petri dishes of glands.

Tiny organs pumping out lethal fluids were amusing to have in the lab. But when the research team started looking into the science of snake bites and their remedies, their regard for the organoids turned serious.

Available antivenoms often need refrigeration, a storage option not available many places where bites are most common. And treatments are often manufactured by injecting the venom into horses and collecting samples of the animal’s immune response, Clevers says. Those horse molecules can initiate an allergic reactions in humans.

The tiny organoids proliferating in Clevers’ lab could one day give researchers a nearly inexhaustible supply of venom for research. Instead of farming a few poisonous snakes to occasionally extract their venom and shoot it into horses, for example, “you could have 2,000 species in a biobank,” he says.

Plus, the organoids duplicate on their own, and can be frozen or thawed for experimentation at will. In theory, a fridge full of poison glands could provide an endless supply of poison to design new treatments for bites.

Though a plentiful supply of organoids is the goal, the lab equipment needed to mass-produce them isn’t cheap, Clevers says. But he and biologist Freek Vonk, or “the Dutch Steve Irwin,” as Clevers calls him, are going to try.

Vonk specializes in herpetology, and will list the top 50 most iconic and venomous snakes for Clevers and his team to track down and foster into organoids. If this small bank of snake poison glands works, it could set the stage for a collection of over 2,000, Clevers says.

But even if the freezer full of snake organoids doesn’t materialize, it’s clear Clevers' lab was onto something in their Friday afternoon sessions. “We do the most interesting work when we don’t have a proposal and just try things,” he says.