These Human Bone Daggers Were Made to Kill With 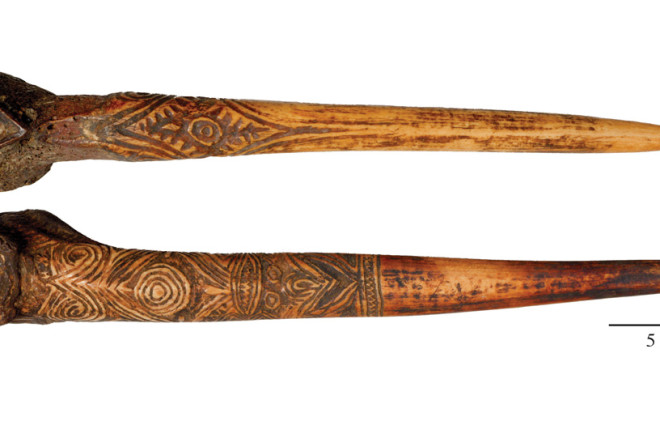 Bone daggers from New Guinea. a) Human bone dagger attributed to the Upper Sepik River. b) Cassowary bone dagger attributed to the Abelam people. (Credit: Hood Museum of Art, Dartmouth College)Daggers made of human bone were regularly used in mortal combat in New Guinea, and now scientists find these weapons were specially engineered for strength so they could find repeated use in violent confrontations. Bone daggers were once widespread in New Guinea. The weapons were worn on men's upper arms, and were carved with elaborate inscriptions. However, they were more than just ornaments.

"They were used for hand-to-hand combat, or to finish off victims wounded with spears or arrows," said study lead author Nathaniel Dominy, a biological anthropologist at Dartmouth College in Hanover, New Hampshire. "When two men faced off with each other, they tried to stab each other in the neck with these daggers, and if one succeeded in inserting his dagger between cervical vertebrae, he would twist the dagger and break his victim's neck. That was the sole purpose of these daggers." These daggers were made from two kinds of bone. Most were actually made from the equivalent of the shinbones of the

"When one usually thinks of bird bones, one typically thinks they're filled with air to help enable flight, but cassowaries are flightless," Dominy said. "They're formidable birds — their feet each have a big spike, and they can jump up and stab you with them." Cassowaries were respectable prey — some odes to dead men recounted the number of their cassowary kills, the researchers noted.

Three-dimensional reconstructions of each dagger in the present study. (Credit: N. Dominy et al.) However, some daggers were made from human thighbones. "Most daggers came from a man's father — they exhumed femurs from graves and shaped them into daggers as a public way to show they inherited all the magic and powers of their father," Dominy said. "Or the bones were taken from someone they killed in combat so they could inherit all the powers of their victim — preferably a formidable warrior." The scientists were examining bone daggers kept at Dartmouth College's Hood Museum of Art when they noticed the weapons were shaped differently based on what bones they were made from. Daggers shaped from cassowary bones were flatter, while weapons shaped from human bones were more curved.

The research team's computer models found that curves would make daggers substantially more resistant to bending. To see if human-thighbone daggers were curved because human bone is weaker than cassowary bone, the researchers used X-rays to scan the structures of five human-bone daggers and six cassowary-bone weapons. The scientists found that human and cassowary bone had similar material properties. As such, they suggest that human-bone daggers were not curved because human bone is weaker than cassowary bone. "Cassowaries and humans walk similarly, and their bones respond to stress similarly," Dominy said. Instead, the researchers suggest that human-bone daggers were curved because human bone was more valuable, and therefore worthy of greater protection. "Human-bone daggers are rare and prestigious — they're filled with what anthropologists call 'symbolic capital,'" Dominy said. "So their owners could not afford to break them. Once their tip breaks, they're drained of all their symbolic power. So they were engineered to last as long as possible — heirlooms worth valuing and protecting." "Every culture on Earth elaborates or decorates ordinary utilitarian objects, and so we tend to view that behavior as adaptive, as having evolved for something," Dominy said. "One possibility is that humans are motivated to decorate objects as a way to signal to others, such as a reproductive partner or an ally, about their traits or attributes. A dagger whose sole purpose was to be a weapon also conforms to this idea, and they even adjusted the way they made it so their greater social prestige might last longer." The question remains — why were cassowary-bone daggers made flatter and weaker? "One option is that doing so made them more comfortable when they were tied to the upper arm," Dominy said. "Another possibility is that the thinner shape had less friction during insertion into a human joint." You can see, and even print, 3-D models of these daggers here. The scientists detailed their findings online April 25 in the journal Open Science.