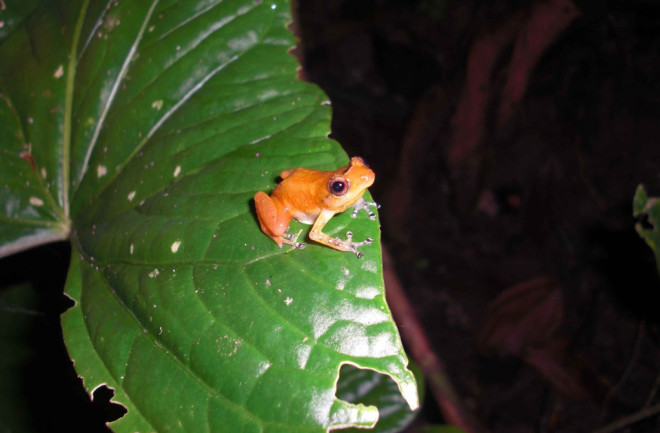 Frogs, like this one of the genus Diasporus, are surviving a deadly fungus in El Copé, Panama. (Credit: Graziella DiRenzo) A community of frogs in Panama may have built up resistance to a deadly fungus that has imperiled one third of the amphibian population around the world, according to a paper published Wednesday [Oct. 3] in Ecological Applications. The fungus is called Batrachochytrium dendrobatidis, or Bd. It's also commonly referred to as chytrid fungus. In 1999, researchers linked amphibian deaths, mostly frogs, to specific strains of the fungus, which attacks the animals’ skin. Frogs use their skin for respiration, and the damage caused by Bd can disrupt this function and lead to death. A May study in Science argued that Bd originated on the Korean Peninsula 50 to 120 years ago. The fungus likely spread globally via amphibian exports for food, traditional medicine and pets. The question scientists have wrestled with is how to control Bd given that it’s already spread globally. In other words, how do you put the genie back in the bottle? The answer might be that you can’t. But some or many species might recover by forming resistance to the fungus. And that appears to have happened in this frog community in El Copé, Panama.

In 2004, 74 amphibian species were decimated by Bd in El Copé. Within four years, 30 species were extinct and nine were imperiled, the Ecological Applications paper says. A team lead by researchers at the University of Maryland performed a field study in El Copé from 2010 to 2014 to examine the extent of Bd on the population, made up mostly of frog species. They used a statistical model to assess disease dynamics. The researchers discovered that infected animals were dying at a rate comparable with uninfected animals, suggesting the infected amphibians had formed resistance to the fungus. The study says survival for both infected and uninfected amphibians was near 96 percent. Other teams researching Bd-infected amphibians have also seen recoveries, the paper says. And there is growing evidence that Bd’s virulence weakens over time, resulting in fewer amphibian deaths. “Our results provide a glimpse of hope for amphibian populations persisting in the face of major threats,” says Graziella DiRenzo, now a postdoc at the University of California, Santa Barbara, and lead author of the paper. “But it does not mean that amphibian populations will rebound to the abundance they were prior to the threat,” DiRenzo says, “or that the ecosystem structure has not been compromised.”