These flatworms plunge their penises into their own heads to inject themselves with sperm (when they must). 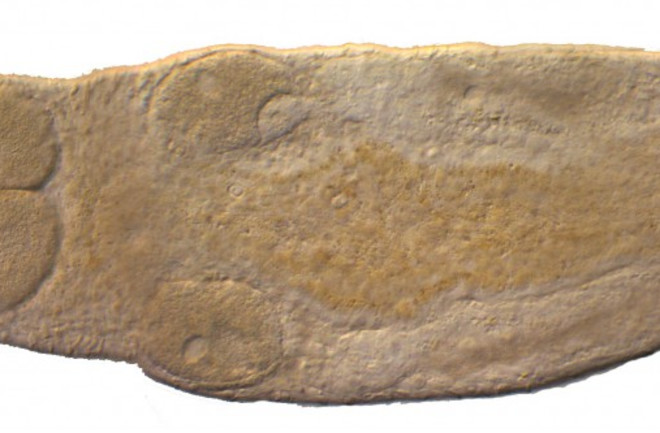 A very ordinary flatworm with a very extraordinary way of reproducing. Image credit: Lukas Schärer The flatworm Macrostomum hystrix isn't exciting to look at. Its diet of microalgae doesn't raise any eyebrows, and you probably wouldn't even notice one if you came across it in its native habitat. But in the bedroom, these flatworms take kink to a whole new level: when they can't find a partner, they will stab themselves in the head with their needle-like penises and inject sperm to self-fertilize. In principle, it is what scientists call hypodermic insemination: the practice of forcefully depositing sperm outside a female genital tract—and yes, it's as usually as rough as it sounds. Bed bugs are infamous for it, as this type of insemination (also called traumatic insemination) causes major damage to the female and reduces her fitness, though a number of species have been demonstrated to reproduce in this way, including flatworms. Since most flatworm species are hermaphrodites (possessing both male and female sex parts), the decision of who gets to inseminate whom is settled in a rather special way: penis fencing. Two individuals will, quite literally, use their male copulatory parts (called stylets) in bizarrely beautiful combat until one is able to plunge his sperm-delivering organ into the other's body. The then-labeled "male" in this exchange earnestly injects his sperm, then disengages, leaving the now-female with the burden of bearing the pair's young. https://www.youtube.com/watch?v=wn3xluIRh1Y But what if a penis-fencing male can't find a sparring partner? According to new research just published in Proceedings of the Royal Society B, they just inject themselves instead. Scientists from the University of Basel in Switzerland and Bielefeld University in Germany had recently demonstrated that M. hystrix was capable of self-fertilization — not an uncommon ability amongst species that possess functioning male and female reproductive parts simultaneously. But they weren't sure how the flatworms moved their sperm, which is neatly packaged in their male bits at the tail end of their bodies, to somewhere where the sperm could migrate towards the female bits nearer to the head. Luckily, the see-through nature of these flatworms allowed the scientists to observe sperm moving about inside their bodies, so they placed mature flatworms into wells of a 24-well plate either alone ("isolated") or with two others ("triplet"), and checked on them over time. The triplet flatworms, unsurprisingly, had sperm injected into their bodies — most often in the tail to mid-body region — after eleven to thirteen days of snuggling up together. The isolated worms also had sperm in their bodies, but oddly, the sperm were found somewhere else: in the animals' heads. "Such a pattern strongly suggests that outcrossing in triplet worms normally occurs through hypodermic insemination into the tail region of the worm," the authors explain, "whereas self-fertilization in isolated worms is likely achieved through the extraordinary mechanism of hypodermic self-insemination." In short — when there's no one else to stab a stylet into, these flexible worms whip their tails around, penis at the ready, and inject their own heads with sperm.

The basic body plan of M. hystrix, with the male bits in the tail. Figure 1 from Ramm et al. 2015 The team didn't directly observe this auto-injection, but the curious placement of the sperm strongly suggested that self-stabbing occurred. If the sperm were simply able to wriggle free internally and make their way to the eggs somehow, then they should — like in partnered matings — be focused in the tail where the sperm are stored. If the sperm had come from the tail, why would they bypass the eggs to go all the way to the head and then make their way back? They had to be directly placed from the tail into the head. Thus: hypodermic self-insemination. Why the head and not, say, the middle of the body? Well that's simple really: that's the only place they can reach. Or, as the authors put it, "presumably due to anatomical constraints that limit the possible sites of autosperm injection to this region." The team also showed that the more sperm found in an isolated flatworm's head, the more offspring it produced, suggesting that not only do these flatworms self-inseminate, but the smart sperm are able to find their way to the eggs even though they start at the wrong end. The team further demonstrated the flatworms' flexibility by taking the individuals that had reproduced normally (after a good penis-fencing match, as is normal for a flatworm) and isolating them. They then waited another six days to see if those flatworms would also self-inseminate — and they did. "This is to our knowledge the first described case of individuals apparently injecting sperm into their own head or upper body region," the authors state in their conclusions. Citation: Ramm SA, Schlatter A, Poirier M, Scharer L. 2015 Hypodermic self-insemination as a reproductive assurance strategy. Proc. R. Soc. B 20150660. DOI: 10.1098/rspb.2015.0660