These Ants Would Definitely Win a Sword Fight 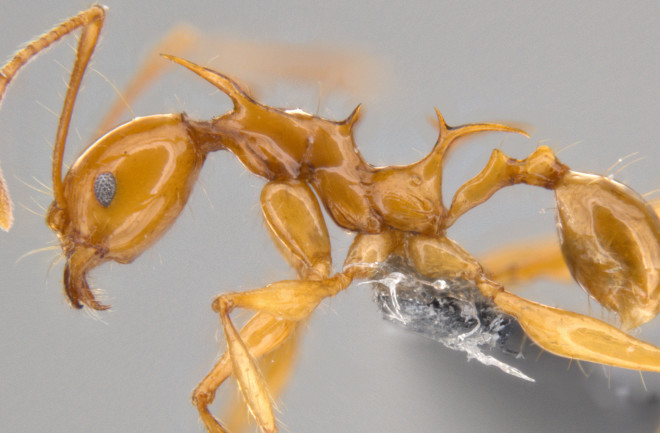 Pheidole viserion, a newly discovered ant species from Papua New Guinea. (Credit: OIST) What do you get if you take an ant and add a couple of scimitars to its back? You'd get an ant that fits nicely into

, a diverse group of ants in Indonesia with wicked-looking spikes adorning their bodies. Looking something like the ninja warriors of the ant world, these guys have another unique feature as well: giant heads and jaws that they use to break apart and transport large portions of food.

Researchers from the Okinawa Institute of Science and Technology working in New Guinea have found two new additions to the group, both of which possess the distinctive spiky spines common to this type of ant. They named the two species Pheidole viserion and Pheidole drogon — an homage to Daenerys Targaryen and her draconic companions in Game of Thrones. To generate those crisp images of dragon ants, researchers used a technique called micro-CT scanning. Basically, they took a series of X-rays at various depths and reconstructed them to produce a 3-D model. This gives researchers the ability to conduct virtual dissections of the ants from anywhere in the world, which helped them solve a thorny problem.

3-D scans of Pheidole drogon minor (left) and major worker (right), a newly discovered species named after the dragons in 'Game of Thrones'. (Credit: OIST) The evolutionary purpose of those distinctive spines has long been a mystery to researchers, who assumed that the blades were used for defense purposes. Thanks to their scanning technique, they peered inside the structures. They discovered that in soldier ants of the species, the spines are filled with muscles, and are likely used to support the ants' oversized heads. So, in addition to having built-in weaponry, Pheidole ants are also super strong. Talk about an unfair advantage. The team published its findings in two separate papers Wednesday in the journal PLOS ONE. They also published separate papers describing two other ants species that belong to the same genus, but don't possess the "inordinate spinescence" seen in their relatives.