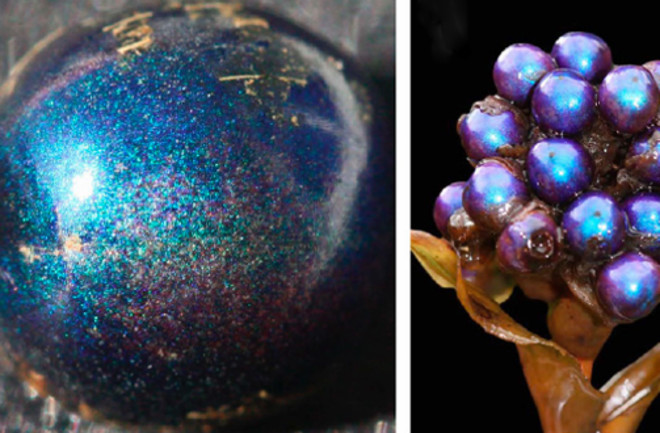 In the forests of central Africa, there’s a plant that looks like it’s growing its own Christmas decorations. Shiny baubles sprout from between its leaves, shimmering in a vibrant metallic blue. Look closer, and other colours emerge – pinpricks of red, orange, green and violet. It looks as if Seurat, or some other pointillist painter, had turned their hand to sculpture.

They belong to a plant called Pollia condensata, a tropical metre-tall herb that sprouts its shiny berry-like fruits in clusters up to 40-strong. These little orbs are iridescent – they use special layers of cells, arranged just so, to reflect colours with extraordinary intensity. This trick relies on the microscopic physical structures of the cells, rather than on any chemical pigments. Indeed, the fruits have no blue pigment at all.

In the animal kingdom, such tricks are commonplace – you can see them at work on the wings of a butterfly, the shells of jewel beetles, or the feathers of pigeons, starlings, birds or paradise and even some dinosaurs. But in the plant world, pigments dominate and structural colours were thought to be non-existent are much rarer.

Silvia Vignolini from the University of Cambridge discovered Pollia’s secret at Kew Gardens in the UK. Her group, led by Ullrich Steiner, was scouring the plant world for species that bend light in interesting ways. Under the recommendation of the Smithsonian’s Robert Faden, Vognolini sought out Pollia, and with help from Kew’s Paula Rudall, she found a sample of the plant. It was collected from Ghana in 1974 but it’s still as vivid as ever. (Unlike pigments, structural colours don’t degrade, so the fruits will retain their sheen for decades to come. Some fossils still keep their iridescence.)

Under the microscope, Vignolini saw that the outer part of the fruit consists of three to four layers of thick-walled cells (labelled “1” in the image below). Each cell contains yet more layers, made of cellulose fibres. The fibres all run parallel to one another, but each layer is slightly rotated against the one above it, producing an elegant spiral.

As light hits the top layer, some gets reflected and the rest passes through. The same thing happens at the next layer, and the next, and so on. Provided the layers are exactly the right distance apart, the reflected beams of light amplify each other to produce exceptionally strong colours. The technical term is “multilayer interference”. Or alternatively: “Ooh, shiny!"

Many animals use such structures to produce colour. This is why, like Pollia fruits, the wings of many butterflies and the feathers of many birds, can still look stunning after years in a fusty museum drawer. By finding the same structures in Pollia, Vignolini has uncovered a great example of convergent evolution, where species from different branches of the tree of life arrive at the same adaptations independently.

And the fruits have another unique trick. The distance between the cellulose layers varies from cell to cell. This means that the wavelength (and thus, the colour) of the light they reflect also vary from cell to cell. “Blue is the dominant one,” says Steiner, “but there’s the occasional red or green or yellow one. That’s why it looks pixellated.” Or pointillist, depending on whether you prefer your metaphors based on screens or canvas.

Why does Pollia have such bright fruit? Here’s a clue: you can’t eat them. Well, you can eat them, but there would be no point, because they provide next to no nourishment. They’re practically a dry seed-filled husk. Here’s another clue: Pollia grows in the same regions as another plant, Psychotria peduncularis, which also produces blue berries.

The team thinks that Pollia is mimicking the tasty blue fruits of its neighbour, tempting birds with the promise of tasty pulp, but rewarding them with nothing but seeds to carry. Alternatively, birds could collect the fruits to decorate their nests, or to use in mating displays. Either way, Pollia gets a free ride, and avoids having to spend energy on making sweet, nourishing tissues. It’s an evolutionary triumph of style over substance.