Scientists are collecting solidified lava that resembles both hair and tears to learn about the activity bubbling beneath Kīlauea in Hawaii. 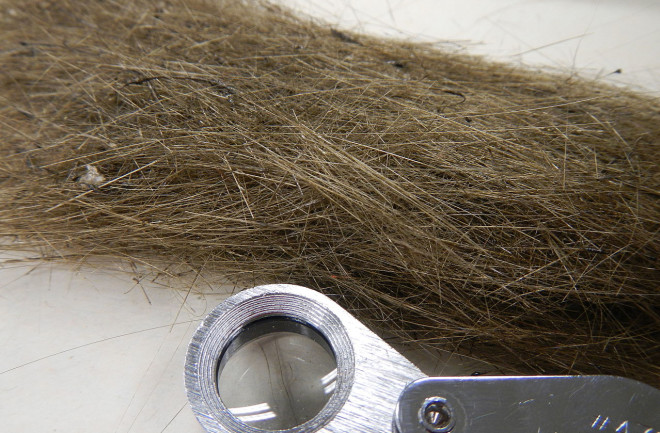 Kīlauea volcano stretches across Hawaii’s southeastern edge, its surface a gloam-hued circumference that emits a deeply ethereal power. Its presence is historic and substantial on the island, and the shield volcano sleeps and wakes as it pleases. Between 200 and 300 millennia old, Kīlauea has recently begun stirring: Since 1983 it has erupted nearly continuously, making it the world's most active known volcano and creating open fissures and spewing magma fountains that drape and drip down the mountain’s rocky sides. Pele, the Hawaiian goddess of volcanoes and fire, is said to live atop its lava lake summit, now one of the world’s most active, and according to tourist mythology and unofficial lore, will unfurl a curse on those who dare remove rock or lava from her sooty domain.

Volcanologists dare toy with guidebook fate — the prizes are precious and telling. They search for Pele’s hair and Pele’s tears. Hours after an eruption begins within Hawai’i Volcanoes National Park, geochemist Kendra J. Lynn treads carefully along Kīlauea terrain, observing the airborne formations in the volcanic mouth above.

When molten lava spews from a volcano and meets the cooler air, it quickly begins to solidify, a process called quenching. Pele’s hair is the byproduct of lava bubbles that are simultaneously quenching and popping. “The bubbles, when they burst, stretch and stretch into a really thin film,” says Lynn.

The lava hardens and stretches, “sort of like when you pull a caramel candy apart, or like a piece of bubblegum,” she says. When at last it becomes completely solid and completely stretched, what used to be a hot and popping lava bubble now resembles long, glassy strands of hair: wafting through the air, accumulating downwind, near where Lynn surveys. She must handle Pele’s hair with care. The thin filaments break easily, often slivering underneath skin. “They even get through your rubber shoe soles,” warns Thomas Shea, a volcanologist at the University of Hawaii. “Tough field gloves and shoe soles recommended.”

Pele’s hair is “easiest to see in the sunlight, as it looks like gleaming gold spider webs on the ground,” says geologist Cheryl Gansecki. But Pele’s tears are never an easy find, laying hidden and buried within the goddess’s tousles of hair. The tears are shaped like little commas, or tadpoles, or raindrops; obsidian black with a glassy sheen, denser than the hair and often no larger than a dime. They too are volcanic glass, the result of lava quenching without stretching. “You can think about throwing a stone into a body of water, and water droplets are thrown out from that disturbance,” Lynn says. The tears are denser, more compact, but no less delicate. They are the miraculous byproduct of vigorous volcanic ejection, offspring of a lava blast.

Finding a Pele’s tear is like being let in on a beautiful secret, and they contain many: gas bubbles, minerals, crystals. Once they are chemically assessed in research labs, “all these things give a glimpse of what’s going on inside the volcano,” Lynn says. At Lynn’s lab, at the U.S. Geological Survey Hawaiian Volcano Observatory, she uses this chemistry to understand the grand timescales of how magma move and are stored in the volcano. Gansecki, an affiliate professor at the University of Hawaii at Hilo, has used Pele’s tears and hair to predict how lava might behave. Shea observes how magma crystallizes during its explosive ascent.

It seems unbelievable: On the face of an active volcano, deep within the glassy ruck of Pele’s hair, within the tiny miracle of Pele’s tears, are clues into what has been transgressing miles beneath the surface, over timescales ranging from hours to years. “The excitement never wears off,” Lynn says. “He or she who sees the most rocks wins, because there’s always more to learn.”