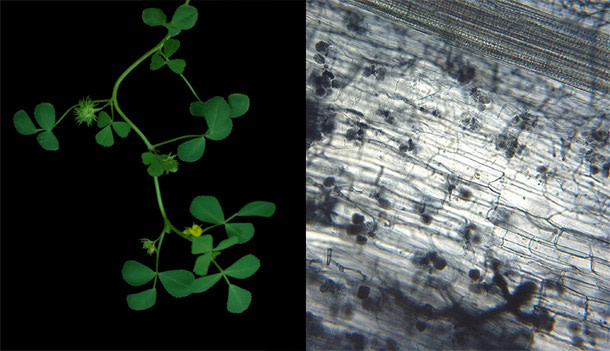 It is very easy to find the world’s most extensive marketplace – just find your nearest forest, field or garden, and look underground. The planet’s land plants are engaged in an ancient alliance with the so-called “AM fungi” that grow into their roots. One plant might be colonised by many fungi, and a single fungus could connect up to many plants. The fungi harvest nutrients like phosphorus and nitrogen from the soil and channel them to their hosts. In return, the plants provide the fungi with the sugars and carbohydrates they need to grow. This symbiotic partnership covers the planet in green. It’s common to 80 percent of land plants, and is credited with driving the evolution of this group some 470 million years ago. Now, Toby Kiers from Vrije University in Amsterdam has found that plants and fungi have maintained their grand alliance by setting up a strong market economy. All natural coalitions are vulnerable to cheats. Any individual could withhold nutrients from one or more of its partners, benefiting from their contribution while giving nothing back. But Kiers found that at least one plant – barrel clover – can tell which of its fungal partners are giving it the short shrift, and punish the cheats by holding back on precious resources. More surprisingly, the fungi can do the same. The result is a massive biological market. Plants and fungi both provide goods and services to one another, and individuals that don’t play their part receive little few rewards. And because both parties have a say in whom they interact with, and have many partners to choose from, neither can afford to cheat the other. The market stays competitive, and cheats don’t prosper. Kiers discovered this by housing clovers in carbon dioxide containing a slightly heavier isotope of carbon. She could use the isotope to track the flow of carbon as it travelled into the plant, became assimilated into sugars, and flowed into the fungi. She found that the clover sends more carbon to a species of fungus – Glomus Intraradices – that gives it plenty of nutrients in return. It’s stingier when dealing with two less cooperative (but closely related) species – G.custos and G.aggregatum. Even when Kiers inoculated a single root with different fungi, the plant could finely control the share of carbon that went to each partner. The plants can even tell which ‘individual’ of any one species is being more cooperative. Kiers exposed the same clover roots to two fungi of the same species – one that had access to a glut of phosphorus and one that had none at all. She had effectively forced one of them to be a co-operator and the other to be a cheat. And sure enough, the plant gave more rewards to the cooperative partner. But the fungi have their say too. Kiers reversed her earlier experiment, using one fungus that tapped into to two adjacent set of clover roots. One of the plants had more access to carbon than the other, and the fungus sent more phosphorus in its direction. This two-way market is very different to a lot of the other symbioses in nature. In most cases, one party is in control. It has its pick of partners and can easily sanction those that don’t cooperate with it. For example, bacteria called rhizobia also work together with the roots of plants, extracting nitrogen from the soil in exchange for shelter and nutrients. But rhizobia can only ever colonise on set of roots and once they’ve settled down, they’re stuck. That puts all the power with the plant. If the rhizobia don’t produce enough nitrogen, the plant can seriously curtail their growth by starving them of oxygen, and the rhizobia can do nothing to retaliate. They’re partners, but you could equally see them as slaves or domesticated pets. The root-based alliance between plants and fungi is clearly different. Because each party interacts with many others, they have many potential partners to choose from. This means that either party can terminate any specific contract – an equality that keeps both of them honest. Reference: Kier, Duhamel, Beesetty, Mensah, Franken, Verbruggen, Felbaum, Kowalchuk, Hart, Bago, Palmer, West, Vandenkoornhuyse, Jansa & Bucking. 2011. Reciprocal Rewards Stabilize Cooperation in the Mycorrhizal Symbiosis. Science http://dx.doi.org/10.1126/science.1208473More on symbiosis: