The Women Who Stare at Babies 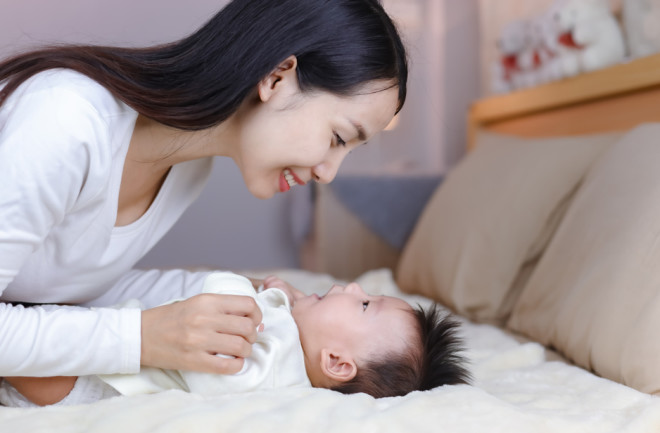 A drooling baby face is not equally exciting to everyone around it. A new study says that young women who like the idea of motherhood get more enjoyment than their peers from staring at infants' faces. But they don't love all of those chubby mugs equally. Even more than the baby-neutral, wannabe moms are biased toward the cutest ones. Amanda Hahn is a researcher at the University of Glasgow's "Face Research Lab," directed by psychologists Lisa DeBruine and Benedict Jones. (On their website you can see an averaged photo of all seven lab members' faces, because of course.) Hahn is especially interested in motivation. For this study, she wanted to know what drives people to look at photos of babies—or not. Hahn focused on heterosexual women with no children of their own. She recruiting 200 subjects online; their average age was about 22. As for the baby pictures, Hahn started with 10 photos of real babies. Then she digitally tweaked them to create a slightly cuter, plus a slightly less cute, version of each baby. (Information about what shapes make baby faces more or less cute had come from a previous study.)

A hundred subjects watched babies flash by on the screen one at a time. The pictures lingered for just a few seconds each. But women could press one set of keys to make a face stay on the screen a moment longer, and a different set of keys to speed things up and move on to the next baby. In a separate experiment, the other hundred women rated all the baby faces on a cuteness scale of 1 to 7 ("not cute" to "very cute"). Finally, all the subjects filled out a questionnaire about their maternal tendencies. They answered questions about how much they want to be involved in aspects of child raising such as dressing, grooming, and taking kids to activities. They also rated how much they enjoy hanging out with kids, how strongly they want children of their own, and how maternal they feel, compared to their peers. The key-pressing task is a way to measure how rewarding someone finds a picture. People who enjoy looking at a photo will press the button to keep it on the screen. Hahn found that her subjects did stare longer at the artificially cute-ified babies than the uglified ones. (In the picture above, the allegedly cuter baby is on the left.) But certain women enjoyed the cute photos more than others did. To measure how rewarding the attractive babies were for different subjects, Hahn measured the gap between each woman's time spent staring at cuter and less-cute babies. The women with the widest gaps also had the highest maternal tendency scores. That's not because other women couldn't tell which babies were cute. In the ranking experiment, subjects rated the cuter photos significantly higher than the less-cute ones. But there was no link to their scores for maternal tendencies. Hahn thinks this means women with more motherly feelings experience more reward in their brains from seeing a cute baby—but it has nothing to do with whether they can spot a cute baby in the first place. Of course, this is all about women who don't have kids of their own. It'll take more studies to find out whether actual moms still find it rewarding to stare at other people's cute babies. They may be too busy cleaning up drool and poop to look around.