The Weird Wingless Ant That Glides About Backwards, Leading With Its Rump 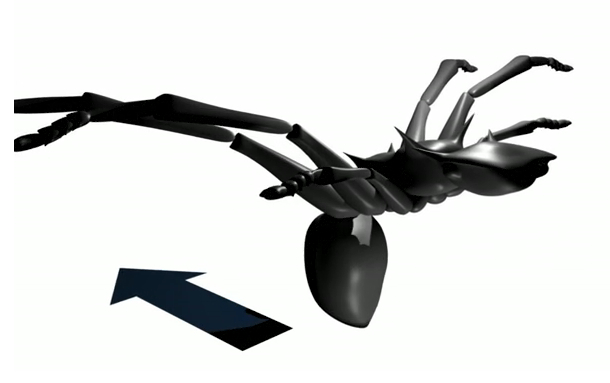 3D rendering of C. atratus guiding itself with its legs as it falls... backward.

43 species of ants in a single Peruvian tree, which is "about equal to the entire ant fauna of the British isles." But what if they fall? Ending up on the ground—far removed in distance and ecosystem niche—could be fatal. So hundreds of species of canopy-dwelling ants evolved the ability to direct their fall in a number of impressive ways, as a post

in The Why Files explains. For example, the gliding ant

). This includes wingless aphids and flat spiders that can glide at an angle of 45 degrees. These arthropods don't have wings or even partial wings that show up in the fossil record, which could put the evolution of controlled descent—some of the first evolutionary developments towards flight—earlier than researchers thought. Controlled gliding, Dudley says, “preceded the origin of wings, and so the evolution of flight is more about control than about the formation of wings.” Some other animals can also glide for long distances without proper wings, like the gliding lizard Draco sumatranus

. This video shows researchers dropping a non-gliding control ant, followed by the gliding C. atratus, which makes it back to the tree's trunk. http://youtu.be/Tcw37Bg7vn8 Here's a video of C. atratus in a wind tunnel, controlling its path with its legs.

[via The Why Files

Correction, December 14: The headline of this post originally said the ant glides upside-down. That was wrong. But it does lead with its butt.