It all got started with a 'hole' in the Sun that sent energetic particles hurtling toward Earth. 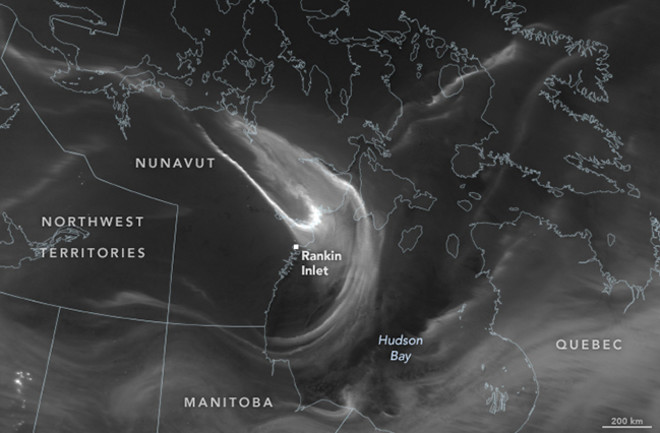 The Suomi NPP satellite captured this image of the aurora borealis over Canada on Nov. 29, 2022. (Credit: NASA Earth Observatory)

On Nov. 29, a wind from the Sun slammed into the protective magnetic bubble that surrounds the Earth at a speed of about 430 miles per second.

As you might expect, the bubble (scientists call it the "magnetosphere") got all roiled up. And that sparked what NASA describes as a vibrant display of the aurora borealis, commonly known as the northern lights.

As the auora swirled above Hudson Bay and other parts of Canada, the Suomi NPP satellite was there to capture the action — as seen in the image above, acquired at about 2:30 a.m. local time.

It all got started with a hole in the Sun — a coronal hole, to be more precise.

These dark, relatively cool, and less dense regions of the Sun's upper atmosphere feature an open magnetic field structure. This allows protons and electrons that make up the solar wind to stream out more readily. And when the rotation of the Sun on its axis points a coronal hole toward Earth, we can get bombarded by a speedier wind than normal.

On Jan. 22, 2014, an auroral display over Tromsø, Norway looked all the world like a pirate ship. (Credit: ©Tom Yulsman)

When just such a speedier wind hit our magnetosphere on Nov. 29, it triggered what scientists call a geomagnetic storm. During the storm, electrons from the solar wind accelerated along Earth's magnetic field lines toward the polar regions. Here, they slammed into oxygen and nitrogen atoms, exciting them to higher energy states. When the atoms relaxed, they released their accumulated energy as light, creating the dancing, swirling, shimmering spectacle of the aurora borealis. (In the Southern Hemisphere, the phenomenon is called the aurora australis.)

As it turned out, the geomagnetic storm on Nov. 29 wasn't terribly strong, according to NASA. But it nonetheless had enough oomph to produce a vivid display.