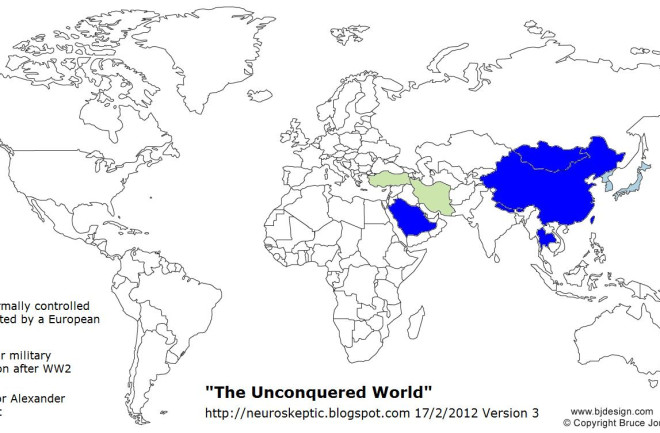 A thought struck me the other day: China is the only place in the world that has never been controlled by a European power, whether as a colony, protectorate, territory, mandate, etc.

Thinking about it a bit more I realized this is not quite true, but it’s not far off. As far as I can tell (thanks Wikipedia) the following countries were never officially under European control. I’m including the USA, Australia, New Zealand and the USSR as “European”. Note that I use the modern names of countries to refer to the territory that falls within their borders, even though it wasn’t always called that.

Iran and Turkey make the list, unless you count Alexander the Great.

Japan and North and South Korea make the list unless you count the post-WW2 occupations.

All of these areas were under various forms of influence at different times, but they never formally lost their sovereignty to Europe. (Edit: Iran and Turkey removed because they were conquered by Alexander.) (Edit 2: Added Bhutan and Nepal which I missed before. Changed map to show special status of Japan, Korea, Turkey & Iran).

Disclaimer: I’m not a geographer; this is something I put together purely out of interest. It’s quite likely that I’ve missed some. In particular I don’t know anything about the small island nations. Please comment if you can correct this, it’s a work in progress.