The two twists that let hummingbirds fly like insects 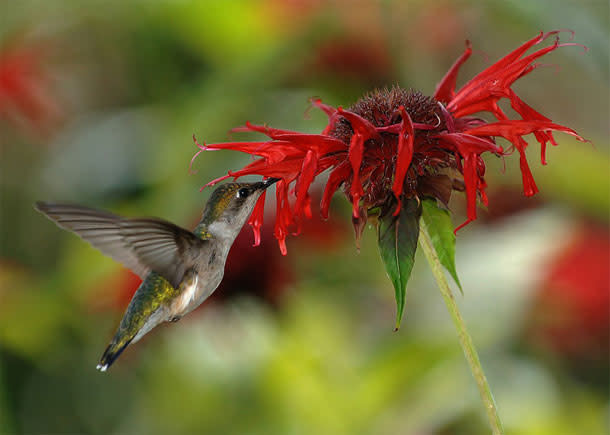 In flight, the hovering hummingbird is more like a insect than a bird. Most most birds only create lift when they flap downwards. But the hummingbird, by flipping its wing before it flaps upwards, can create lift in both directions. Insects do the same thing, but their wings have no bones inside them. How does the hummingbird fly like a fly despite having the bones of a bird? Tyson Hedrick has found out, by filming hovering hummers with high-speed X-ray cameras. I've written about the results in my new piece for Nature News, so go there and read the full story (including details about how hummingbird muscles work at high gear). The meat of it is this:

By filming ruby-throated hummingbirds (Archilochus colubris) in flight, Hedrick showed that the birds invert their wings by twisting their wrists. “It looks like it’s affecting the whole wing because the bird’s skeleton is very compressed and its wrist isn’t very far from its shoulder,” says Hedrick. In most birds, the wrist collapses on the upstroke to draw the wing towards the body as it is raised. Hummingbirds have adapted the same movements to rotate their wings instead. “The usual mechanism makes the upstroke aerodynamically invisible,” says Hedrick. “The hummingbirds’ mechanism makes the upstroke aerodynamically effective.” The videos also showed that hummingbirds flap their wings by twisting the humerus (upper arm bone), rather than flapping it up and down from the shoulder like other birds. To understand the difference, Hedrick recommends trying to mimic a bird by flapping your arms. “You’re doing something not too different to what a seagull’s doing,” he says. To mimic a hummingbird, “hold your upper arm close to your body with your elbow on your hip, and flap your forearms back and forth”.

Go try it. You can look as stupid as I did when I was writing about the paper. Photo by Joe Schneid