The Taj Mahal: Can India Save This Corroding Beauty?

India’s architectural wonder and symbol of love is turning brown and green due to pollution and neglect. 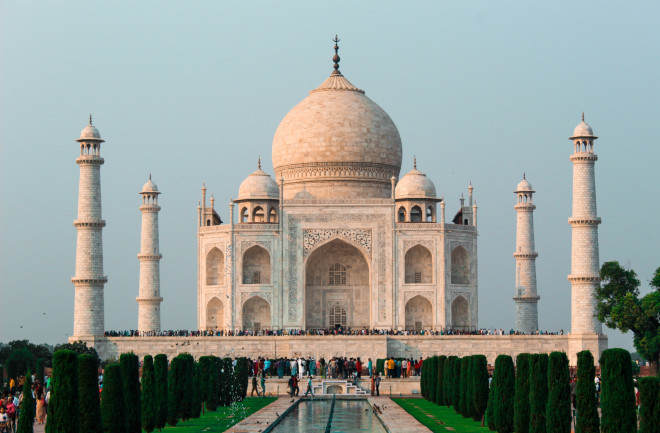 There is an old saying that the Taj Mahal is pinkish in the morning, milky white in the evening, and golden when the moon shines. When I visited this majestic structure back in 2010, it was evident that this no longer held true.

Considered one of the New Seven Wonders of the World, as chosen by people across the globe in 2000, the Taj's white marble has taken on a greenish-brown tint. Over the past 10 to 20 years, the discoloration of the Taj Mahal has accelerated due to a combination of rising pollution levels and burning trash. The government's failure to restore the marble monument hasn't helped the situation. In 2018, the people of India formed a petition demanding that the government either restore the Taj or demolish it. The activism and support to restore the Taj Mahal is rooted in the monument’s history and significance.

An Eternal Symbol of Love

Recognized as one of India's greatest cultural treasures, and a symbols of love, the monument is situated on the banks of the Yamuna River in the city of Agra, approximately 130 miles south of New Delhi. Mughal Emperor Shah Jahan built the Taj in memory of his wife, Empress Mumtaz Mahal, who died during childbirth in 1631 A.D. The structure houses her tomb, and that of Shah Jahan himself.

Shah Jahan reigned from 1628 to 1658. Most historians believe that the monument was built during this span, between 1632 and 1647. The project of devotion and love took more than 15 years to complete and required the help of up to 20,000 workers, including stonecutters, inlayers, carvers, painters, calligraphers and dome builders. Artisans came from India and far away places such as Europe, Persia and parts of the Ottoman Empire.

Numerous innovations carried out by the architects working under Shah Jahan make the monument especially remarkable. The Taj Mahal was designed with an optical illusion in mind. As you enter its gate, the monument appears near and large. But as you get closer, it shrinks in size. The arches and domes of the Taj are a striking contrast to a lush green landscape, blue skies, and red pathways that lead to the monument. Color-changing walls make the structure feel as though it is alive and enchanted, while its near-perfect symmetry emits a sense of peace and harmony. Inside, the Taj is covered with beautiful calligraphy that evokes themes of judgment and rewards for followers of Islam.

While the monument itself is full of symbols and meanings, the garden and reflecting pool of the Taj Mahal also hold great significance. The carefully-crafted garden is said to represent the perfection and beauty of heaven replicated on Earth. The pool is intended to purify the vision of those who enter.

Today, the grand monument still houses only the tombs of Mumtaz Mahal and Shah Jahan. It is widely regarded as one of the greatest architectural achievements in the Indo-Islamic region. It also may be one of the greatest representations of the rich culture and history of India. According to CNN, former Indian Tourism Minister Alphons Kannanthanam referred to the Taj Mahal as “India’s pride.” Thus, the deterioration of the Taj is a true tragedy for the citizens of India.

“The Taj is known for its amazing white marble but that has changed,” says Mike Bergin, an environmental engineering professor at Duke University. According to Bergin, the Taj Mahal has increasingly taken on a brown tint that has become obvious over the past two decades. So, what exactly is causing the deterioration of this beautiful monument?

Apparently, a combination of pollution and dust particles are accumulating on its surface. A study in 2015 indicated that 3 percent of surface pollutants are black carbon, 30 percent are brown carbon and the rest is dust. Bergin explains that these pollution particles are from various combustion sources that are in and around Agra. This includes the burning of trash, dung, crop residue and fossil fuels. The main brown carbon sources are biomasses and garbage emissions, while black carbon has been linked to vehicle pollution. The dust particles settling on the Taj likely are kicked up by the wind and local activities, such as farming and traffic. These particles cling to the Taj’s marble surface and primarily aren't water-soluble, making them nearly impossible to wash off. Though the Taj can be cleaned, Bergin says it is a labor-intensive process that can potentially alter the surface of the marble.

The nearby banks of the Yamuna River also present multiple threats. The water is filled with chemical waste from factories, raw sewage and heaps of garbage that sustain swarms of breeding flies. Their feces stain the white marble of the Taj. To make matters worse, receding water levels of the Yamuna pose a serious threat to the foundation of the structure.

The banks of Yamuna River are polluted with garbage aiding to the deterioration of the Taj Mahal. (Credit: ModernNomads/Shutterstock)

India has been racing to preserve the Taj Mahal. Over the last decade, authorities have banned vehicles within 1,600 feet (500 meters) of the monument. In 1999, the country's Supreme Court ordered the closure of 53 iron foundries and 107 other factories in Agra that were blamed for contributing to the discoloration of the monument. This also prompted more than 2,000 factories in the area to switch from coal or oil to natural gas.

Overall, decreasing pollution and dust particles in the region hasn't been easy, since many changes would impact the local economy. After failed efforts and continued deterioration of the Taj Mahal, the Supreme Court instructed the state of Uttar Pradesh (where the city of Agra is located) to seek out foreign experts to help stop the damage in 2018.

Aside from scrubbing the Taj clean, recent efforts to save the Taj include building a new dam to help restore the flow of water to the Yamuna river, shutting off some of the 52 discharge pipes pouring waste into the water and improving local sewage treatment plants. In addition, the number of tourists allowed to visit daily is now capped at 40,000. The price of admission for Indian citizens, who make up the majority of visitors, was hiked up in December 2018 by 400 percent, from 50 rupees (69 cents) to 250 rupees ($3.43). The future of the Taj Mahal remains uncertain. However, it is undeniable that this mesmerizing architectural wonder is essential to the history of India and remains a lasting symbol of incessant labor and love that should be preserved.