Serotonin is a chemical jack-of-all-trades. It relays messages between the cells of the brain and in doing so, controls everything from anger to sleep, body temperature to appetite. But in one insect, it is the key to Pandora's box, periodically unleashing some of the most destructive swarms on the planet. It is the chemical responsible for turning solitary desert locusts into massive plagues.

With desert locusts, you get two insects for the price of one. For most of their lives, they are positively antisocial and will avoid other locusts - a far cry from the devastating swarms that farmers fear. Only when the climate is right and food is abundant do they lose their solitary streak. Their numbers increase to the point of overcrowding and that flicks a chemical switch which changes their bodies and behaviour. Within 2 hours, the solitary, green locusts transform into extremely sociable, yellow or red versions that gather in voracious swarms, several billion strong.

The transformation is a complicated one - it involves over 500 genes, the presence of other locusts and stimulation of their hind legs. Most of these details have been discovered by Stephen Simpson at the University of Oxford and Malcolm Burrows at Cambridge, and their latest finding is the most amazing yet.

They have found that the locust makeover is indeed a complex process but one that hinges on a single choice - stay alone or band together. And that choice is controlled by serotonin. This single chemical can trigger the change all by itself, and without it, the locusts won't transform. In scientific lingo, it's both necessary and sufficient for bringing out the sociable side of locusts.

In a previous study, Simpson and Burrows found that the locust's change is accompanied by a brief but intense spike of serotonin in their thoracic ganglia - bundles of nerves in their midsection. Through new research, two members of their labs, Michael Anstey and Steve Rogers, found that the more serotonin there was in the ganglia, the more sociable the locusts were. By crowding locusts for different times, they created a mix of individuals with different behaviour and found that the most sociable ones had three times as much serotonin as the most solitary ones.

There are two aspects of crowding that trigger the locust transformation and serotonin is behind both of them. As individuals jostle, they bump against touch-sensitive hairs on their hind legs; that does the trick, as does the sight and smell of other locusts. These two paths are very different but both converge on the thoracic ganglia, which receives signals from both brain and legs.

Anstey and Rogers simulated the two routes by either showing individuals a group of other locusts behind glass, or by electrically stimulating their leg nerves. Both actions triggered a serotonin spike in their thoracic ganglia, and the social behaviour that goes with it. But if they injected the insects with chemicals that block the work of serotonin or prevent the insect from making it, no amount of leg-stroking or locust-watching would trigger the change.

On the other hand, the duo found that they could start the change without any of the usual triggers simply by applying serotonin directly to a locust's thoracic ganglia or by injecting it with chemicals that boost serotonin's effects. And while locusts usually take an hour or more to transform fully, they took just half and hour to become incredibly sociable if they had previously injected with 5-hydroxytryotophan - the chemical that serotonin is made from. Clearly, serotonin is enough to convert a locust from loner to socialite. 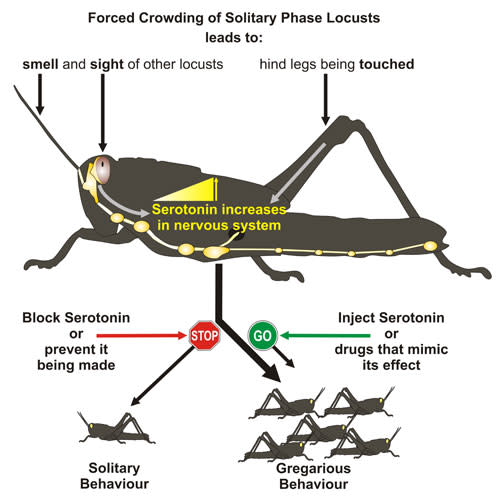 Once the change begins, it's not clear what keeps locusts in their social state. The serotonin spike is just temporary and after many generations of group living, locusts actually have lower levels of serotonin than even individuals that live in solitude. Anstey and Rogers believe that the initial surge kick-starts a long-term programme of gene activation, and prolonged crowding firmly ingrains the behaviour in the locust's brain and body.

It's effectively a form of memory; the animals interact with one another and change their long-term behaviour accordingly. Serotonin performs similar roles throughout the animal kingdom, so perhaps its part in locust behaviour shouldn't be too surprising. The exciting bit though, is that there are only thirty neurons in a locust's nervous system that can produce serotonin. So it's entirely possible that Simpson's group will eventually discover the individual nerves responsible for the switch from solitude to swarming. 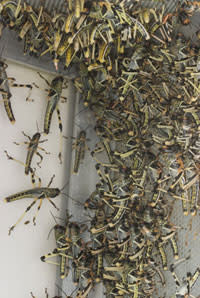 However, it's unlikely that this discovery will help to control actual plagues, at least in the near future. Since serotonin only starts social behaviour and doesn't maintain it, any anti-serotonin chemicals would have to be used while the locusts are living the solitary life. And at that point, there are just three individuals in every 100 square metres of desert - too sparse a distribution to hit with chemical agents.

Serotonin is also widely used in the animal world, so chemicals that mess with it run a heavy risk of inflicting heavy collateral casualties. To avoid that, we would need to tailor any drug to the exact structure of the receptor molecule that serotonin sticks to in the locust - and we don't have that yet.

More on locusts and serotonin: