The Summer One Third of the Great Barrier Reef Died 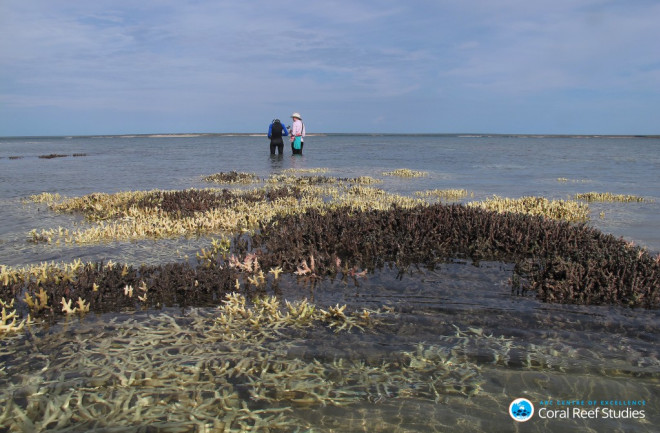 Researchers survey bleached corals in the shallow water in Cygnet Bay, Western Australia, during current bleaching event. Photo Credit: Chris Cornwall April marked the twelfth consecutive month of record-breaking temperatures. That's an entire year of our planet, on land and in the sea, being hotter-than-ever-recorded since record keeping began in 1880. Such extraordinary warmth is affecting ecosystems globally, but perhaps the hardest hit are coral reefs, whose fundamental organisms are incredibly sensitive to the heat. Earlier this year, authorities in Australia reported that the Great Barrier Reef was in the midst of its worst bleaching event ever. Surveys above and below the water estimated that over 90% of the reefs were affected by bleaching. Now, as the summer wanes down under, scientists are finally able to begin to assess the lasting damage caused by this event. Their findings are heartbreaking. "This year is the third time in 18 years that the Great Barrier Reef has experienced mass bleaching due to global warming, and the current event is much more extreme than we’ve measured before," said Professor Terry Hughes, Director of the ARC Centre of Excellence for Coral Reef Studies at James Cook University, in a press release. "These three events have all occurred while global temperatures have risen by just one degree Centigrade above the pre-industrial period." When corals bleach, it indicates that they are stressed, but there is still hope for recovery. Bleaching indicates the loss of the corals' symbiotic algae, called zooxanthellae, which are essential to the survival and health of the coral. While the color change is dramatic, corals are able to recover from a bleached state, granted that the stress which caused them to bleach in the first place is removed expediently. But if the coral stays too long without its algal aids, it dies, and is often overtaken by much less cooperative algae species. When that happens to too many corals in one area, entire tracts of reef can shift from being coral-dominated to algae-dominated—an often irreversible change of habitat known as a phase shift.

A graphic explaining coral bleaching versus death, from The Great Barrier Reef Marine Park Authority The hope was that, although the percentage of reefs with bleached corals noted in April was gut-wrenching, most of them would weather the storm. But after surveys of more than 100,000 corals on 84 different reefs, the results are grim. The corals of the Great Barrier Reef have been struggling for some time. Scientists estimated that between 1985 and 2012, the Great Barrier Reef lost over 50% of its corals. Some fell victim to crown-of-thorns starfish outbreaks fueled by agricultural runoff, while others were smashed by cyclones or stressed to death by warmer waters. Per year, just under 3.5% of the reef's corals vanished. But the reef has never been hit as hard by anything as it was by this most recent bleaching event. Scientists now estimate that 35% of the corals in the north and central sections of the reef, from Townsville, Queensland to Papua New Guinea, are dead. That's a decade's worth of damage in just one summer.

A map of the estimated death of corals on reefs along the Great Barrier Reef. Provided by the ARC Centre of Excellence for Coral Reef Studies In some areas, particularly south of Cairns, the carnage has been minimal. Scientists say that weather events early in the season kept the southernmost portions of the barrier reef cooler than normal, so that when temperatures spiked in the summer aided by El Niño, the temperatures in the south never reached the extreme highs that areas northward did. Between Cairns and Townsville, surveyors found only 5-20% mortality. But north of Cairns, particularly in the central area off the coast of Cooktown, more than 50% mortality was found. Many of those corals were decades to hundreds of years old.

A mature field of staghorn coral from Lizard Island in February (top), when surveyors found extensive bleaching, and in April (bottom), with algae grown over the now-dead coral. Photo Credits: ARC Centre of Excellence for Coral Reef Studies Back in 2012, scientists said that recovery was still possible—that if the stressors caused by climate change and nutrient runoff were relieved, the reef could increase in coral cover by nearly 3% per year. And even if all we did was keep crown of thorns sea stars in check (and there are now highly funded efforts seeking to do just that), the reef could still recover by nearly 1% per year. So before this past year's bleaching, it was already going to take an estimated half a century to get back to pre-1985 levels. We can now tack on another one to three more decades after this. And that's even assuming decisive action is taken now to curb our bad habits that have led to this mess in the first place. I'm thirty years old. I was born in 1985. For much of my life, scientists touted the Great Barrier Reef as one of the great untouched natural wonders of this world—a pristine ocean habitat, safe from the horrors that had wiped out corals in the Atlantic and Caribbean. Now, the world's largest coral reef ecosystem is dying. Much of it is dead already. And the sobering truth is, even if we righted the ship today, I will not live to see the day that the reef looks how it did when I was born. I can only hope that the Great Barrier Reef of legend isn't gone forever.