The strumming assassin that hunts spiders on their own webs 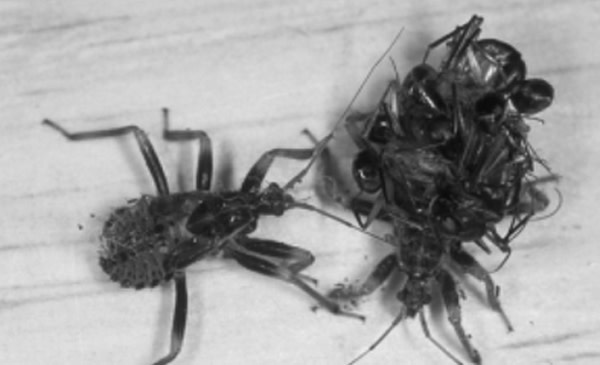 For most insects, walking onto a spider’s web and disturbing the sticky threads would be a very bad idea. The distinctive vibrations of wriggling prey only serve to draw the spider closer and inevitably ends in the insect getting bitten, wrapped in silk and digested. But this story doesn’t always unfold in the spider’s favour. Some vibrations aren’t made by helpless prey, but by an assassin lurking on the web. The assassin bug (Stenolemus bituberus) is a spider-hunter. Sometimes, it simply sneaks up to spiders on their own webs before striking, plunging its dagger-like mouthparts into its prey. But it also has a subtler technique. Sitting on the web, it plucks the silken threads with its legs, mimicking the frequency of weakly struggling prey. These deceptive vibes are an irresistible draw to the spider, who rush towards their own demise. The bug effectively has a way of ordering for delivery when it doesn’t want to go out for a meal. Anne Wignall and Philip Taylor from Macquarie University, Sydney, discovered the bug’s tacticearlier this year. To analyse the extent of its deception, they collected several tangle-web spiders from their university grounds and pitted them against the assassins. They compared the web-strumming actions of the bugs, as well as the struggles of actual prey (a fly and an aphid), the thud of a falling leaf, and the movements of another courting spider. During each encounter, they filmed the action with a high-speed video camera and recorded the vibrations coursing through the web using a laser. The spiders responded to the bugs in the same way as they did to the fly or the aphid, and just as quickly. They always turned in the right direction, and approached the source of the vibrations most of the time. They almost always ignored the leaves and the behaved very differently to the courtship signals of another spider. There’s good reason for this. Wignall and Taylor also found that the bugs produce a very specific type of vibration. They’re short, high-pitched and relatively weak, akin to those produced by prey moving their bodies or legs. These tremors are very different to those produced by falling debris, because they lack any large initial impact wave. They’re more similar to the signals of courting males, but they lack a crucial element – a set of distinctive repeated vibrations – that allows the spiders to spot the advances of their own suitors. Instead, Wignall and Taylor found that the bugs’ vibrations are most like those of weakly wriggling prey. The assassin bug is a generalist. It doesn’t mimic the struggles of any specific victim, nor does it need to imitate the full range of prey vibrations. All it needs to do is to vibrate the web within the range of characteristics that a spider would recognise as “potential meal”. The spider probably senses the presence of exhausted prey that can’t mount much of a struggle. The bugs never mimic the large impact of an insect hitting the web, or the initial fierce struggles that it makes as it tries to free itself. This is probably a very good idea. When the spider senses strong vibrations, it often rushes the prey quickly and without pause; the bugs, however, never incited such speedy attacks. That’s a good call; spiders are dangerous prey and they’re sometimes quick enough to launch a counter-attack, killing their would-be assassins. By avoiding the sort of rapid attacks that spiders reserve for their strongest prey, the assassins might minimise the odds of becoming a meal themselves. Reference: Proc Roy Soc B http://dx.doi.org/10.1098/rspb.2010.2060Image by dhobernMore on assassin bugs: Assassin bugs deceive spiders with coat of many corpses