The Strange, Violent Sex Lives of Fruit Flies and Beetles 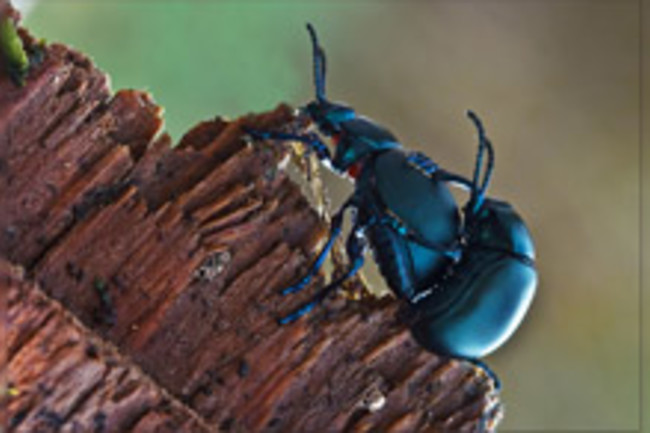 Not all animals have fun during the mating process. Seed beetles can get pretty beaten up, and fruit flies can even get sick from it. When female fruit flies mate, their immune system responds to the sperm the same way it does to germs. University of California, Santa Barbara evolutionary biologist Andrew Stewart sees the immune system as a battleground, a place where the sexes can compete—a female’s immune system will rev up so it can fight off the proteins in the ejaculate, so she can live longer and have more babies. But the exact reason for this immune response is still up in the air. It’s possible the male knows that the female has mated with other male flies, and uses the pathogens in his sperm to beat the other males in fertilizing eggs. Regardless, females still pay a heavy price: Most females mate with several partners, even though if they mate just once, their life span is shortened significantly. But the beetles have it worse, because their mating is so brutal: When a female decides to mate, she repeatedly gets jabbed by the male’s sexual organ, which looks more like a medieval weapon than pleasure tool. But the females put up with the roughness, apparently because they are so thirsty. University of Toronto researcher Claudia Ursprung discovered this bizarre fact by locking 79 female seed beetles in an enclosure for a week—one group got food and water, while the other two groups got either food or water. At the end of the eight-day period, the dehydrated beetles were the ones who attempted to have sex the most. So now we know that males can bribe females to have sex with their watery ejaculate. And for anyone out there wondering, yes, males with extra-large barbs on their sex organs had a better chance at impregnating females than males with smaller barbs. Related Content: DISCOVER: The Truth About Sex DISCOVER: Beetles Of Many Colors DISCOVER: Life Without Sex?