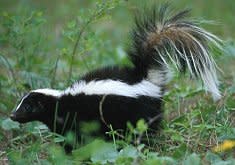 Providing more fodder for the theory that people are drawn to subjects resembling their own names, Theodore Stankowich of the University of Massachusetts, Amherst, led a study on skunks and similar creatures. He wanted to know whether a skunk's bold black-and-white pattern, which certainly doesn't provide camouflage, is actually a warning signal to bigger animals that might eat the skunk.

Poisonous and nasty-tasting insects, frogs, and snakes often use vivid colors to advertise their unpalatability. Don't taste me, the monarch's black-and-orange wings say, and no one gets hurt. Even though we furry mammals have fewer colors to work with, do some of us warn off predators in the same way? 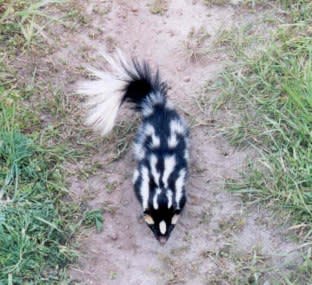 Stankowich and his colleagues gathered data from 188 species of land-dwelling carnivores. They found that boldly patterned or two-toned creatures are, in fact, more likely to use anal gland secretions to defend themselves. (Though they don't all spray, many carnivores use these secretions for communication or for marking their territory. You may have yelled at your cat or dog for this sort of behavior.) Some animals merely dribble out their foul-smelling defense, while others are able to aim and spray it. In addition to boldly patterned or two-toned fur, horizontal stripes are a good indicator that an animal can not only spray you, but has good aim. 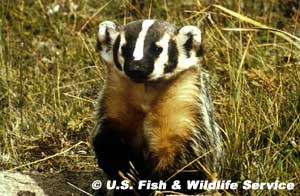 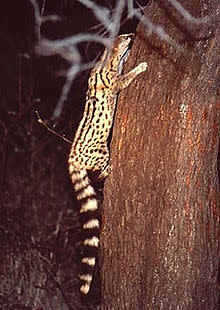 Most of the animals that use this warning coloration are stocky and live in exposed habitats. When threatened, they can't spring into a tree or river for safety. But their coloration is what's known as an "honest signal": a code that accurately represents a trait (in this case, nasty spraying).

Why don't other animals copy this warning coloration? Sometimes they do. For example, the harmless king snake has red, black and yellow stripes that strongly resemble the venomous coral snake's. We humans use a rhyme to tell them apart ("If red touches yellow, you're a dead fellow!") but other animals presumably have to guess.

This is a dangerous game for a mimic, though. Potential predators need to learn by experience how the coloration code works. That means that an animal's bright colors or stripes won't always prevent a predator from taking a bite out of it. Stink-spraying mammals often have tough, loose skin to help them squirm out of a predator's mouth, or are scrappy fighters. If you don't have any defenses to back you up, you'd be better off hiding from predators altogether.

Leave me out of this. I'm a fluke.

The stripes-and-stink pattern isn't just a quirk of skunk relatives. Instead, it seems to have evolved separately several times within the carnivorous mammals. That means it must be a winning strategy in the wars between predator and prey. As for humans, our best strategy is to leave a wide buffer zone.