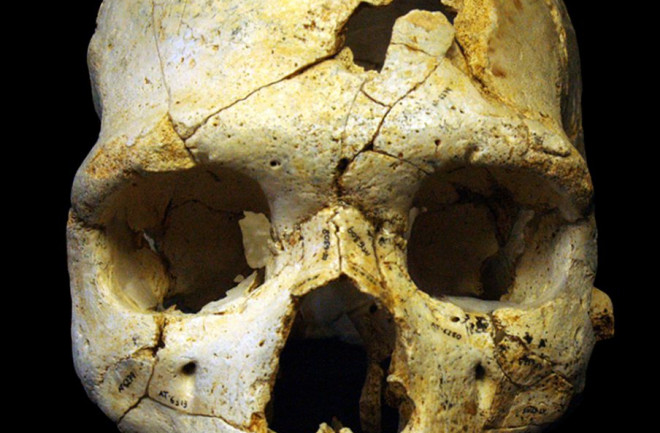 From the scene, authorities recovered DNA, a stone handaxe and more than 7,000 scattered bones, including a bashed human skull. It was a case for the ages. But there was one complication: the events unfolded 430,000 years ago.

The evidence was unearthed by anthropologists beginning in the 1980s at Sima de los Huesos — the “pit of bones” — in Spain’s Atapuerca mountains. The spectacular cave chamber, nearly 100 feet below the surface, has yielded remains from at least 28 hominin individuals. Ancient DNA analysis of the fossils — the oldest human genetic code ever sequenced — indicates that these people were ancestors to Neanderthals.

After more than three decades of research, the remains have revealed much about Neanderthal evolution. But the circumstances surrounding the group’s death and burial remains contentious. Found in a jumble at the base of a 45-foot chute, some say the bodies were deliberately dropped there after meeting violent ends — a Stone Age cold case.

Since systematic excavations of Sima began in 1984, researchers have discovered thousands of hominin fossils there, but only one artifact: a teardrop shaped handaxe of red and yellow stone, nicknamed Excalibur. There’s more digging to do, though: It’s thought more than half the deposit of sediments and fossils has yet to be excavated.

The human remains include at least 28 individuals from both sexes and varying ages. The exact species the Sima individuals belong to is still a topic of debate, but the rich collection has enabled anthropologists to uncover intimate details about their lives as well as their place in the broader story of human evolution.

Compared to modern humans, the Sima humans were short, stocky and smaller-brained. It’s estimated males were about 5 foot 7 and 170 pounds, whereas females stood around 5 foot 2, weighing 125 pounds. Average skull volume was 1230 cm3, about a half cup less than Neanderthals (1410 cm3) or modern humans (1350 cm3).

Based on physical appearance, anthropologists have long argued the Sima hominins were Neanderthal ancestors. The skeletons possess some traits definitive of Neanderthals, which lived about 200,000 years later in Europe. But they lack other classic Neanderthal features, which were yet to evolve.

The proto-Neanderthal hypothesis gained strong support from a 2016 Nature study, which reported DNA from one femur bone and a tooth dated to roughly 430,000 years ago. Although the sequence was just 0.1 percent of a full genome, it is the oldest hominin DNA ever recovered by nearly 300,000 years. It was also enough to place the Sima humans securely on the evolutionary branch leading to Neanderthals, after it split from the lineage leading to Homo sapiens.

Hidden for a Half Million Years

Today, the Sima chamber sits a quarter-mile’s walk from daylight, deep within a network of caves, which includes other fossil sites between 1000 and 1.2 million years old. There may have been shorter routes 430,000 years ago — when the Sima bones likely accumulated — but researchers studying the cave’s architecture think the only entrance to the chamber itself was the same then as today: a 45-foot vertical chute from a higher level of the cave.

Scientists have proposed a number of hypotheses to explain how the fossils got there. The hominins may have been dragged by carnivores, carried by flood waters or trapped after venturing too far. Meanwhile the excavation team offered a more provocative explanation: The individuals were already dead and intentionally deposited by other humans. This would substantially push back the origin of mortuary practices in human evolution. The earliest well-accepted burials occur only after 130,000 years ago, among full-fledged Neanderthals and H. sapiens.

Over the years analyses have made some of the alternatives less probable, and the “deliberate disposal” hypothesis more compelling. But the matter remains unsettled.

Take the carnivore explanation: In addition to proto-Neanderthals, researchers recovered fossils from more than 175 bears and a smaller number of other carnivores, including lions and fox in the cave. However no typical prey animals like mountain goat or deer were found. So was Sima a den for carnivores with an appetite for human meat?

Probably not. No known carnivores — living or extinct — exclusively eat humans. Nor do they make dens so deep in caves. Furthermore, in a 2014 Quaternary Science Reviews study, researchers scrutinized 2401 human and 1200 carnivore specimens from Sima under the microscope, looking for tooth marks. Just about 4 percent of the human and carnivore bones had bites. This suggests scavengers, at some point, chomped on a small number of these bones, but the site was not a carnivore den.

It seems none of the humans were eaten to death by carnivores. But some may have been beaten to death. According to a 2015 PLOS One paper, one skull had two fractures, likely caused by a blow from a blunt implement during face-to-face combat. Though not as definitive, another study the following year identified trauma on eight additional Sima skulls.

It seems to be a convincing case of Stone Age homicide. But that still doesn’t explain how the dead bodies entered the chamber. Were the perpetrators hiding their victims? Or did loved ones inter the corpses, suggesting proto-Neanderthals held beliefs about death and afterlife? That part of the mystery may never be solved.

In any case Sima de los Huesos is one killer pit of bones.