The Silkworm Road: How A Moth Became An Economic Powerhouse 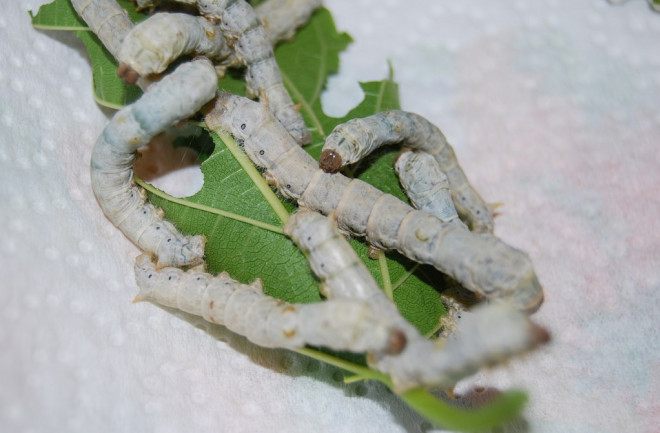 Bombyx mori, the humble silkworm, has built global trade networks — but the full story of how it came to be an economic powerhouse has remained uncertain. A new genetic study spins a more detailed backstory. (Credit: Wikimedia Commons/Fastily) The Silk Road moved more than silk. Spices, grain, livestock and a thousand other items were on offer along the loose network of roads and maritime routes that also played a central role in the movement of religious and cultural ideas across the ancient and medieval worlds. But we don't call it the Spice Road, or the Grain Road. While the term "Silk Road" is a 19th century invention, it reflects the importance of the silkworm that produces the raw material for what's arguably the most famous fabric in the world. The question: Where did those little worms start spinning? While a number of invertebrates secrete protein fibers that can create silk, only one, Bombyx mori, the silkworm (technically the caterpillar of the Bombyx mori silkmoth), can produce enough, and at the same consistency of quality, to be considered for use in widescale production of the coveted fabric. That's why, in the history of animal domestication, the silkworm stands alone as the only invertebrate to be entirely domesticated (sorry, fellow beekeepers...our winged honeys are technically not fully tamed). Unlike honeybees, for example, B. mori cannot survive on its own in the wild. The moths have lost the ability to fly and thus cannot reproduce without human intervention. Both caterpillar and moth have also lost their pigmentation, robbing them of camouflage in a natural environment. B. mori, domesticated from the Bombyx mandarina moth native to China, also produces more silk fibers in larger cocoons than its wild relatives. (And if you're wondering how the whole silk-making magic happens, after molting several times, the silkworms secrete protein fibers from their salivary glands that harden into filaments they use to spin protective cocoons around themselves for the final molt and pupal stage. Humans harvest the cocoons and typically boil them to separate the fibers for easier spinning of the human variety, creating threads, yarns and, eventually, fancy outfits. The silkworm, killed in the process, is eaten in many cultures.) While most archaeological evidence points to the silkworm originating 5,000 years ago (and possibly even earlier) in China, the details have been generally unknown. Today, researchers announced an effort to unravel the roots of the domesticated silkworm with the help of both genetics and the trade network built by the little caterpillar's skills. Source of Strain The team sampled genetic material from 137 silkworm strains including locally bred lineages derived from ancient lines and also more recently developed "improved strains" currently deployed in modern sericulture. They sequenced the DNA and compared it with the genomes of wild relatives. After determining the genetic relationships between the hundred-plus strains and their more distant kin, the reasearchers found that local Chinese strains were closest to the silkworm's wild ancestor, B. mandarina, confirming a Chinese origin for the domesticated vertebrate. One Chinese strain in particular, CHN-L-M4, appeared to have mixed genes with all the others, hinting it may be the original silkworm, or closely related to it. While the researchers did not speculate that the strain was ancestral to all others, they did map out the silkworm's spread — literally. Perhaps not too surprisingly, the animal was dispersed from China numerous times, following different arms of the Silk Road to expand into Europe, Southern Asia and the southern part of China.

The dispersal of different strains of silkworm, sequenced in the study, lie along different arms of the Silk Road (terrestrial routes in red and orange, maritime route in blue). The triangles represent the location of strains sampled; colors reflect their similarities with other strains and suggest dispersal along the fabled trade network during multiple events. (Credit: Xiang et al 2018, 10.1038/s41559-018-0593-4)Get Your Goat Genes Today's study also revealed a few intriguing connections to other domesticated animals and even plants. For example, both silkworms and many crops have genetic signatures associated with improved utilization of nitrogen, which boosts protein output. A related genetic signature has also turned up in goats and is related to wool production, though its selection during the process of that animal's domestication remains unclear. Silkworms also share a similar genetic variation with domesticated rabbits that's associated with behavior. Though the researchers note its presence, likely the result of the domestication process in many animals, they do not speculate on what traits it may confer to either animal. The research appears today in Nature Ecology & Evolution.