We recognise dead people by the absence of signals that indicate life - movement, responsiveness, pulses, brain activity, and so on. The Argentine ant does the same, but its signal is a chemical one. Throughout its life, an ant uses chemicals in its skin to automatically send out a message to its nest-mates, saying "I'm alive. Don't throw me out." When it dies, these "chemicals of life" fade away, and their bodies are evicted. 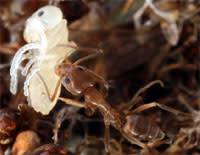 Social insects like ants and honeybees are fastidious about their colony's tidiness. If any individuals die, they're quickly removed and thrown away in one of the nest's refuse tips. This behaviour is known as necrophoresis (literally "moving the dead") and it protects the remaining colony from any parasites or diseases that may have killed their former colleague.

Scientists have long believed that ants and bees recognise dead individuals by smelling chemicals like fatty acids that are given off by their decaying corpses. But there's a fatal flaw to that theory - ants dispose of their peers' carcasses long before they've started to decompose and long before the chemical signs of decay show up.

Dong-Hwan Choe from the University of California, Riverside found how they do it. Throughout their entire lives, Argentine ants are already coated in chemicals that would normally earn them an unceremonious trip to the garbage dump. Their stay in the colony depends on other substances that mask or nullify these signals - molecular residents' permits that allow them to stay in the nest. These life-signals rapidly fade away upon the ants' demise, revealing the death-signals underneath.

Choe found that there was something special about ants that had been dead for an hour or more. If he dropped these corpses into nest entrances, they were removed within three minutes, but freshly killed ants took three times as long to clear. If Choe coated living pupae with chemical extracts prepared from dead ants, they would be thrown away rather than carried back into the safety of the nest, but again, this trick didn't work if the extracts were made from freshly killed ants.

Choe searched the outer shells (cuticles) of dead ants for chemicals that disappeared within an hour of death. He found two - dolichodial and iridomyrmecin. Both chemicals evaporate easily and vanish from glass slides within an hour. The same goes for ant cuticles. While the ant is alive, they constantly secrete these chemicals from glands in the tail and their cuticles are loaded with them. Within ten minutes of death, these levels halve and not a trace remains after 40 minutes. 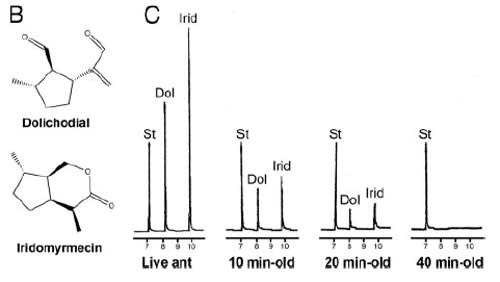 Dolichodial and iridomyrmecin blocked the natural instinct of workers to move other ants. When Choe applied them to pupae, workers would often ignore them. Choe found that another group of substances, triglycerides in particular, had the opposite effect, encouraging workers to aggressively bite pupae and carry them to refuse piles. Even triglycerides taken from live ants stimulated this behaviour.

This means that throughout their lives, ants carry chemicals that would cause other workers to throw them out, were they not overridden by dolichodial and iridomyrmecin. These two substances allow living ants to go about their duties undisturbed. It's their disappearance that alerts other workers that their comrades have kicked the bucket.

Choe thinks that the strategy is widespread, for many other species of ants secrete related chemicals from the same gland. It's a clever system, one that makes it very hard for ants to mistake live colleagues for dead ones. It also allows them to remove dead nest-mates very quickly, long before they've started to decompose, which is good for the colony. Worker corpses are often riddled with infections that could spread easily within the close quarters of the humid, warm nest. These diseases pose a very real danger that needs to be dealt with quickly.

Other animals, however, have hijacked these communication lines. The parasitic wasp Alloxysta brevis lays its eggs in aphids that are guarded by ants, but it fools these bodyguards by coating its jaws with a chemical that mimics iridomyrmecin. It uses the ants' own chemical signal to stop them from attacking or removing it.