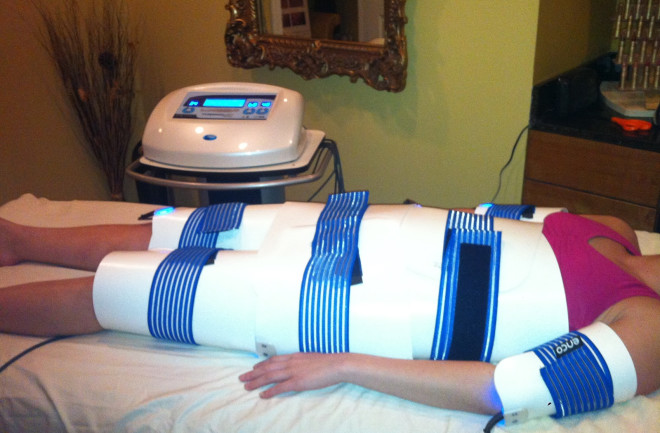 (The Shambulance is an occasional series in which I try to find out the truth about bogus or overhyped health products. Having recovered from my taste of no-calorie noodles, I’m back this week with Shambulance first officers Steven Swoap and Daniel Lynch.)Sometimes it’s for the best when product claims turn out to be blatant lies. If purveyors of infrared body wraps, for example, were telling the truth, clients would walk out of their spas dripping grease from their skin—and that wouldn’t even be their biggest concern, next to the heart attacks.All body wraps are not created equal. There are slimming volcanic ash wraps, herbal wraps, mud wraps, and even chocolate wraps. Some are only meant to be relaxing skin treatments. Others involve swaddling clients mummy-style in bandages and plastic wrap, then leaving them for an hour or so to stew in their own sweat.These kinds of body wraps often promise weight loss or overall slimming. In reality, how much weight you lose will depend on how much water your body sweats out in a frantic effort to cool down. Additional svelte-ness might come from the squishing action of the tight bandages. Both effects will be temporary. As another benefit, spas that offer body wraps unfailingly promise “detox.” This isn’t the first time the d-word has come up here. Suffice it to say that unwanted molecules are filtered from our blood and sent out of our bodies by the liver and kidneys—not sucked from us forcefully by mud wraps, juice diets, or ionic foot baths.But the most amazing promises of all come from the infrared body wrap. Unlike some of the body wrap’s other incarnations, this treatment doesn’t require you to strip down, be slathered in goo, and get bandaged head to toe. Instead, clients lie on a bed with their clothes on while several infrared-generating silicone pads are strapped around them. Then they’re left under a heated blanket for a while.

So far, it sounds like nothing more than a toasty nap. But spas say that you’ll leave an infrared wrap session skinnier and healthier, with better circulation, a faster metabolism, clearer skin, and less cellulite. How?

The pads give off long and short infrared waves that penetrate deep into your fat layers, websites claim, increasing your body temperature, metabolism, and blood circulation. The heat “break[s] down fats into a liquid form, allowing secretion of body water, toxins and fat as you perspire,” according to one Chicago spa.

All that formerly stored fat, once liquefied by the infrared waves, is obviously eager to escape your body through the nearest exit. But don’t worry if the fat gets stuck inside you—you’ll burn it anyway. “You can burn 900 to 1,400 calories or more in just one 50 minute session,” another Chicago site proclaims.

After studying this calorie chart, I’m thinking I’ve been wasting my time by walking to work. What I should really do is buy some of these silicone pads, strap them on, and see if I can get someone to roll me there.This is “completely insane,” says Williams College physiologist Steven Swoap. “How are they allowed to write this stuff?”For one thing, “Fats simply don’t come out of sweat glands,” he says. Though if they did, you would definitely have to throw away your spa outfit after soaking it with grease from the inside.Infrared radiation, Swoap explains, isn’t a magical cellulite-blasting weapon. In fact, people naturally give off long infrared waves as body heat. “Instead of wrapping yourself with this stuff, maybe a good long hug with your significant other would work too,” Swoap says. Or, if you’re looking for shorter infrared waves, “You could take your TV zapper and shoot it at yourself all day long.”

Daniel Lynch, a Williams College biochemist, says that heating parts of your body could certainly increase your water loss. But your fat isn’t budging. “To get rid of the fat, it must be metabolized,” he says, “and that is not going to be enhanced by lying on a bed with silicone wraps on your legs.”

Furthermore, Lynch speculates, if your fat deposits really did get broken down and sent back into your blood—and you were, say, lying on a table instead of using those fat molecules for fuel—”You could actually have dangerous levels of fatty acids circulating in your blood. That’s good for a heart attack!”

If you’re looking for an exercise-free way to burn fat, Swoap suggests hanging out in a cold room rather than under a warm blanket. Being in the cold will raise your metabolism as your body tries to replace the heat you’re losing. If you’re still hankering after the spa experience, you could always wait until winter, wrap up in a scarf, and have someone log-roll you down the sidewalk.