The Secret to Building the Pyramids? Wet Sand 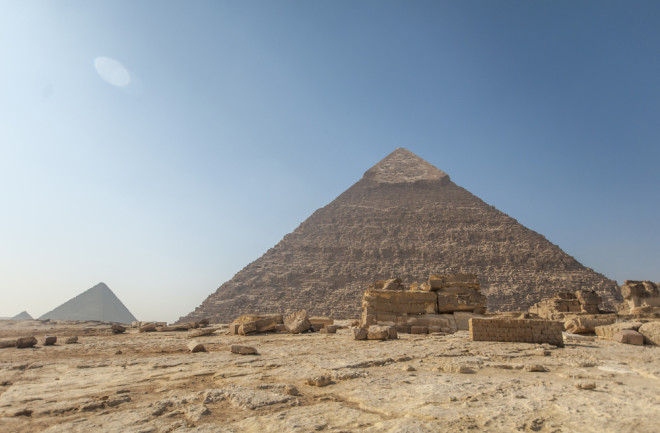 The Egyptian pyramids are considered one of the Seven Wonders of the World, and it’s not surprising: when you stare at the massive structures, you can’t help but wonder, “How the hell did they do it?” The stones, some weighing 9,000 pounds, came from far away and needed to be dragged into place. Now, researchers from the University of Amsterdam believe they’ve discovered ancient Egyptians’ cunning strategy to move those massive stones: wet sand.

With the right amount of water, researchers found, sand turns into a sturdy surface that halves the force needed to drag sleds loaded with rocks or statues across the desert. In fact, an ancient wall painting in the tomb of Djehutihotep shows a person pouring water over the sand in front of a sledge.

Sand builds up in front of the sledge when it is dragged over dry sand. On the wet, compact sand this does not occur. (Credit: Fundamental Research on Matter)

To test their hypothesis, researchers loaded up sledges with heavy weights and, well, dragged them across sand. When they dragged the weighted sled across dry sand, the front of the sled dug into the sand and nosedived deeper into trouble. When the sand was wet, however, the sand stiffened and allowed the sled to slide across with ease. At a molecular level, that’s because so-called capillary bridges arise when water is added to sand, which binds the sand grains together.

Researchers then used a rheometer to measure how much force is needed to deform a certain volume of sand. They found that wet sand is about twice as stiff as dry sand, which, in turn, halves the amount of force needed to move a weight. They published their findings Tuesday in the journal Physical Review Letters.

The simple wetting of sand, then, may have made building the pyramids easier—though the 100,000 slaves (according to Greek historian Herodotus) who labored constantly to build the massive structures may debate that definition of easy.