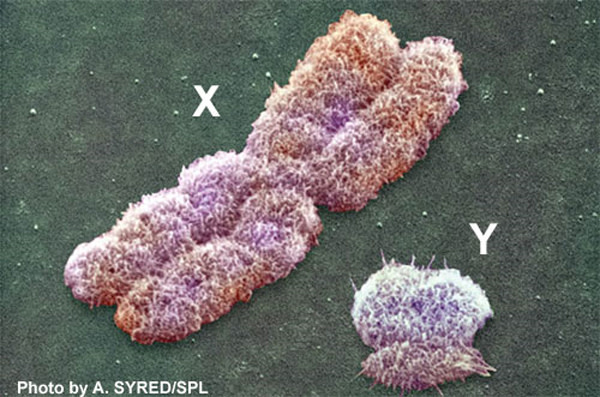 In humans, two chromosomes – X and Y – determine whether we are male or female. Of the two, Y tends to get more attention because of its small, degenerate size. Both X and Y probably evolved from a pair of ordinary chromosomes that have nothing to do with sex (also known as autosomes). The story goes that one of these autosomes developed a gene that immediately caused its bearer to become male, and eventually became the Y chromosome of today. The other one became X. Throughout its history, Y has been a hotbed of genetic change, gaining, losing and remodelling its genes at breakneck pace, and shrinking by 97%. Its partner – X – has allegedly had a less eventful past, and should faithfully represent the ancestral autosome. This history of X and Y was first proposed in 1914 by Herman Muller, and ever since, his assumptions about X’s stability have gone untested. Now, it seems that Muller was wrong. Daniel Bellott from the Howard Hughes Medical Institute had uncovered the secret history of X, which turns out to be no less storied than Y’s tale. Bellott’s work began, surprisingly, with chickens. Birds also have sex-setting chromosomes, known as Z and W, which vary between the males and females. The big difference is that in birds, males are ZZ and females are ZW – obviously in humans, males are the ones with the differing pair. Like the Y chromosome, W has shrunk and changed considerably while, as Bellott says, “the sex chromosomes that are present in both sexes (X and Z) were supposed to be above the fray”. But Bellott showed that this isn’t true by completely sequencing the Z chromosome for the first time. (The chicken genome has been published before but sex chromosomes are notoriously difficult to sequence). His draft revealed that both X and Z arose from different autosome ancestors, and none of the 1,000 genes on the Z chromosome has a counterpart on the X. Nonetheless, they have independently evolved very similar features. Both are very loosely packed with genes. In any given stretch of DNA, the Z and X chromosomes have half as many genes as other autosomes do. And among these patchily distributed genes are piles of litter - long stretches of repetitive DNA with no clear function. Most of these are sequences known as LINEs. “These LINEs are basically selfish elements,” says Bellott. “If a cell is like a computer, the genome is like a hard drive, and the LINEs are computer viruses that copy themselves over and over, filling up the drive.” Z has 70% more LINEs than any other chicken autosome. The LINEs can’t quite account for all the extra space between the genes, but that might just be because they’ve decayed over time. Bellott explains, “We think that, for whatever reason, the mechanisms for cleaning out this "junk DNA" are less effective on Z and X chromosomes than on autosomes. As a result, junk builds up in between the genes on the Z and X, but because it doesn't really do anything for the organism, it slowly decays. After a while, we can't even recognize the "junk" as LINEs anymore. After millions of years as sex chromosomes, it just looks like the X and the Z have a low gene density.” Why the similarities? It’s possible that both X and Z evolved from autosomes with features that made them more likely to become sex chromosomes. Perhaps, for example, their genes were already sparsely distributed. But Bellott ruled out this idea. He compared X to its closest counterpart in chicken, and Z to its equivalents in humans – none of these relatives had any structural features that made them stand out among other autosomes. There’s nothing that singles them out as ideal candidates for the role of sex chromosome. So it seems that X and Z chromosomes are true examples of convergent evolution – when two entities take different evolutionary roads to arrive at the same adaptive destinations. Not only have their genes become more widely spread apart, they have also gained extra ones. While the tiny Y and W chromosomes have jettisoned genes at great speed, X and Z seem to have gained genes since their ancient days as autosomes. The identity of these added genes is particularly surprising – they’re mostly male-specific genes that are only switched on in the testes. And there are lots of them, arrayed in a huge block. These testes-genes make up around a sixty of the Z chromosome and 1% of the chicken’s entire genome!

This is particularly surprising because the Z chromosome is present twice in male birds, but the X chromosome is only present once in male humans. You might have expected, for example, the X chromosome to be richer in female-specific genes. Bellott says, “The convergent specialization for testis function suggests that there are strong evolutionary pressures on male reproduction.” Indeed, other studies have suggested that traits related to male reproduction are some of the fastest evolving characteristics in the animal kingdom. These pressures are strong enough to trump any difference in the XY and ZW sex-setting systems. Reference: Naturehttp://dx.doi.org/10.1038/nature09172More on sex chromosomes: