The Science of Alpha Males in Animal Species 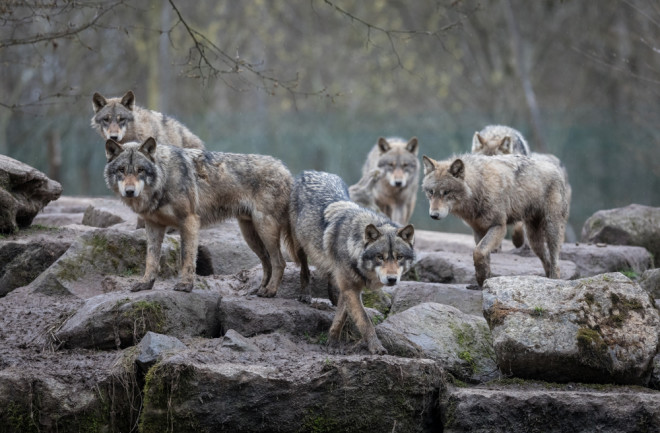 If you were to go by definitions laid out in guides across the internet, you know an “alpha male” when you see one. These are “people who aren’t happy unless they’re the top dogs,” or the confident decision makers whom everyone else defers to.

Ostensibly, the idea that a human could qualify as an “alpha male” comes from observations biologists have made with other species. In a dive into the history of the term, anthropologist Monika Sumra found that one of the first academic uses of an “alpha” label appeared in 1921. A researcher discussing chicken hierarchies, otherwise known as a pecking order, gave the top chicken the first letter of the Greek alphabet. Since then, scientists have talked about “alpha” wolves, primates, walruses and more. But how much of the supposed “alpha” behaviors in the wild exist — and apply to humans?

When it comes to wolves, at least, nothing about their hierarchies transfer to humans. Alpha males don’t exist in these wild canines. Scientists used to think this was the case: In a 1948 publication, a scientist named Rudolph Schenkel wrote that amongst wolves, an alpha pair would fight for dominance and win the exclusive mating rights among the group. Dave Mech, a wolf researcher with the United States Geological Survey, echoed the idea in a 1968 book.

Read more: From Animals To Human Society: What We Learn When Women Lead

But as Mech later realized, the “alpha wolf” behavior appeared only in captive wolves pushed into a group from a range of different backgrounds. In real life, a pack begins when a male and female have offspring. If anyone is dominant in that setting, then it’s because, well, they are the parents. Since learning the reality of pack dynamics, Mech has been trying to get publishers to stop printing his book (they won’t).

Though Mech has debunked the idea amongst wolves, alpha males are very much a real concept amongst some primates. “I could take you into the forest in Costa Rica, show you a group of monkeys and say, okay, pick out the alpha male,” says Kathy Jack, a primate behavioral ecologist at Tulane University who studies alpha male behavior in Capuchin monkeys. “It probably wouldn't take you very long to figure it out.” The male who eats first, whom others move out of the way for, who lies down for a grooming and is instantly approached by others to get the cleaning done — these might all be the marks of an alpha male. In some species, dominance manifests with biological changes too. Capuchin alpha males typically grow to be the biggest ones of the group, and once a male Mandrill becomes an alpha, for example, his testosterone levels rise and his testicles grow larger.

In primates where alpha males exist, where an individual ranks often determines their reproductive success, Jack says. Alphas also have jobs. The top male holds responsibility for protecting others in the cohort from predators or other males attempting to take control of the group. To do so effectively, he needs backup from subordinate males, whom he should be on good terms with. “It’s in his best interest to keep those males close and have good social relationships,” Jack says.

Do the Same Rules Apply?

Some portrayals of a human alpha male might pull on these primate attributes — a kind of natural leader whom others defer to and trust for leadership, and is probably pretty good on the dating scene.

But using the attributes of alpha males among our closest relatives to justify their existence among humans gets messy quickly. For one, being an alpha isn’t an inherent quality: It’s a status a primate might earn later in life, typically after fighting and ousting the current male in that position or after the existing alpha dies.

And when a given primate becomes an alpha male, researchers can’t always explain why he earned that status. Sometimes, the title can surprise the new alpha himself. Once, the top four males in Japanese snow monkey group died in a battle with a mountain lion, so all the females started following around the previously-fifth-in-line male. “For the first week, he was totally freaked out,” Jack, who observed the events, says. “He ran away from them because he didn't know what was going on.”

Primatologists are still figuring out what “makes” an alpha. Some have tried to answer this question by investigating the kinds of personality traits that might predict top-monkey status. Jack and her team have a different approach. They’re looking at 10 years’ worth of data that follows males into adulthood to see if hormones or other parts of their social lives help determine who gains alpha status. Though she doesn’t yet know what their studies will reveal, Jack no longer thinks that the makings of an alpha male lies in these factors. “I think that all males have the potential to be alpha and it's kind of like being in the right place at the right time,” she says.

Compared to humans, the circumstances of a given capuchin monkey’s life don’t change all that often — which is another reason mapping their “alpha male” concept onto ourselves gets tricky. Capuchins and many other primates live in cohorts and generally don't interact with other groups. Humans mingle much more. We have families, friends, coworkers and strangers to interact with, and each with their own dynamics. “Our dominance status within these groups changes all the time,” Jack says. Some primates might be “alpha” in their one setting — but humans juggle different groups all the time, and likely aren’t the authoritative leader in all of them.

Also, only some primates have alpha males. There are a number of species where researchers don’t use that term at all. Larissa Swedell, a biological anthropologist at Queens College who studies Hamadryas baboons, says she doesn’t use the dominance concept when looking at relationships. Males typically hang out as a group until later in life when they acquire at least one mate, which they might get when another male allows him to or when he fights to take one. Mating also happens for as long as possible. When a female is with a male, it’s for good.

Fitting the “alpha male” concept into the Hamadryas baboon lifestyle is hard to do. “I definitely would not equate being alpha with ownership of a female,” Swedell says. “Because then all adult males would be alphas.” There are also primates that are bonded pairs for years, like titi monkeys and gibbons, that raise offspring that then leave and form their own couples, she points out.

There are a range of animal behaviors out there, and just because humans choose to identify with some more than others doesn’t mean we have to. When it comes to chimpanzees, for example — one of closest living relatives — their social structure is one of the most aggressive and political out there, Swedell says. “That’s maybe not the best model, maybe it is,” she says. “It doesn’t have to be what you go to first.” We are just as related to bonobos, who coexist significantly more peacefully.

So if humans are going to draw on nature for rationales about our own behavior, there’s no obligation to look to those with clear alpha males. In fact, nothing is stopping us from drawing inspiration from spider monkeys and just trying to hug it out.