The Robo-Sub That Helps Predict Where the Ocean's Headed

An underwater glider measures parts of the ocean that scientists can't reach. 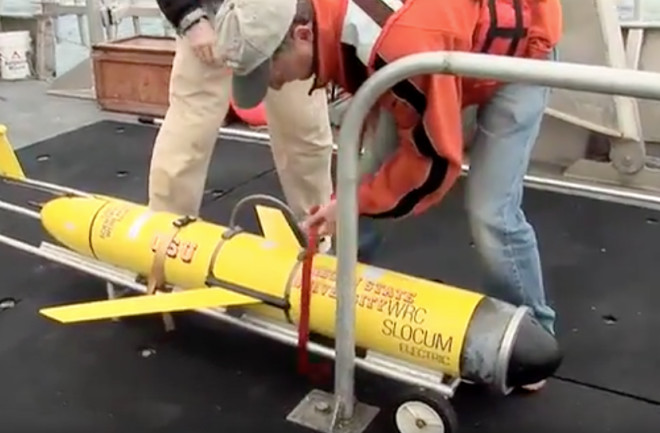 This kind of question is critical for planning future coastal development, but taking the measurements necessary to make predictions can be difficult and downright risky for human surveyors, who could be smashed by falling chunks of ice the size of the Empire State Building.

So send in a bot, says David Holland, an oceanographer at New York University, who teamed up with the National Research Council of Canada (NRC) to deploy a five-foot-long autonomous submarine beneath an iceberg off the coast of Greenland. Called the Slocum underwater glider, the sub propels itself through water with a single-stroke piston, thereby conserving most of its energy for data collection. Sensors under the port-side wing measure conductivity (to find the salinity of the water), temperature, and depth, sending the data to processors within the sub.

Icebergs are difficult to navigate, even for a sophisticated machine like this. In the pitch-black shadow under the iceberg, the Slocum glider has no access to satellite GPS and no visual markers to verify that it is following its intended path. To help the glider get and keep its bearings, the NRC plans to test an acoustic beacon system whose components would be placed underwater at strategic points around an iceberg, allowing the glider to triangulate by sound.

By collecting data on how much and how quickly Greenland’s ice is melting, Holland hopes to create a computer model that will simulate and forecast glacial melt—and the future rise in sea levels—around the world.