The Right Hardware for a Soft Martian Landing 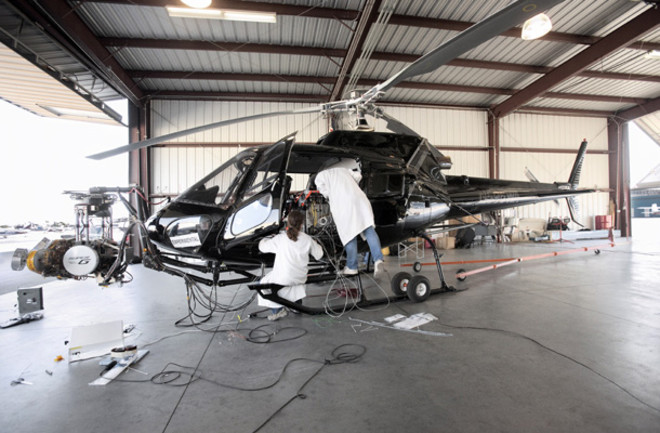 Engineers hook up the data acquisition system before a test of the landing radar that will guide the next Mars rover, Curiosity, to the surface of the Red Planet in the summer of 2012. This past spring, the radar (you can see it here attached to the nose of helicopter) went through two months of flight tests over desert terrain in Southern California at different altitudes and angles intended to simulate trajectories under consideration for the Mars landing. Preliminary results show that the radar is performing as expected. Photographer Spencer Lowell shot the recent test for Discover this spring at a small airport near NASA's Jet Propulsion Labs. Lowell: "Steve Lee, the project manager, told me that the system they were so meticulously working on is the nervous system that is responsible for getting the rover safely to the Martian surface. The tests would run the radar through a variety of flight patterns while recording all the hard data which will be used to program the actual descent system. My only restriction while shooting was to not get within three feet of the radar. After asking if they would open the hangar doors (which they did) I backed up as I could to capture the entire scene. In this particular image you can see two of the main engineers checking the connections to the computer system. What I like most about shoots like this is that I get to see firsthand that very precise science, like sending craft to another planet, often starts off looking like a mess."